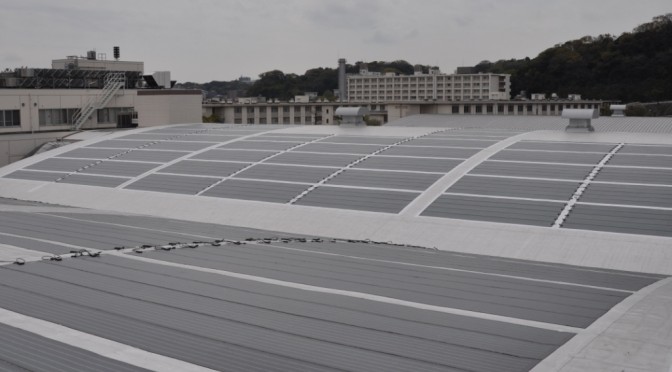 Global Solar Energy, Inc., a leading manufacturer of flexible solar technology, announced today an expansion into Japan’s growing solar market, establishing local partnerships and offering a new design of its PowerFLEX BIPV system that has been adapted specifically for use on rooftops in Japan.

“Recognizing the desire of many Japanese businesses to reap the benefits of the FIT program while also maintaining the aesthetics of their buildings, Global Solar offers an alternative to traditional heavy and rigid glass modules, as well as other flexible PV products”.

Together with partners CBC Co. Ltd, Eco Holdings and OG Corporation, Global Solar is making it easy for Japanese businesses to adopt the most powerful flexible solar roofing module on the market and take advantage of the country’s new feed-in tariff (FIT).

On July 1st the Japanese government’s progressive new FIT program went into effect, requiring utilities to pay 42 yen per kilowatt-hour (about $0.52 per kilowatt-hour) for 20 years from solar plants generating 10 kW of energy or more. As the country reduces its dependence on nuclear energy and opens the door for more renewable energy adoption through the new FIT, researchers estimate this could foster a solar market of $9.6 billion and 3.2 gigawatts (GW) of capacity.

“With its recent FIT program and proven dedication to integrating more renewable energy into its utilities’ portfolio mix, Japan will prove to be one of the most important markets for solar in the coming years,” said Jean-Noel Poirier, Chief Sales Officer, Global Solar Energy. “With our highly-valued partners, Global Solar is well positioned to take advantage of the market growth and bring our powerful and cost-effective PowerFLEX BIPV solar solution to more rooftops around Japan.”

With 12.6 percent aperture efficiency, the Global Solar PowerFLEX BIPV module delivers the highest efficiency in the flexible module sector. Its large format and a high power density (300 W) bring down installation and balance of system (BOS) costs. With a lightweight and flexible design, the PowerFLEX BIPV system is the perfect solution for commercial roofs where traditional glass solar modules are too heavy.

Typical Japanese buildings have compact roofs, making the PowerFLEX BIPV a perfect fit as the module allows more power generation per square foot than any other BIPV solution. Additionally, by being applied directly to a roofing surface and requiring no mounting hardware or roof penetrations, Global Solar’s system maintains the integrity and aesthetics of a building structure.

“Recognizing the desire of many Japanese businesses to reap the benefits of the FIT program while also maintaining the aesthetics of their buildings, Global Solar offers an alternative to traditional heavy and rigid glass modules, as well as other flexible PV products,” continued Poirier.

Global Solar is already deploying its PowerFLEX systems in Japan, including a completed 400 kW rooftop system on the Yokosuka Naval Base, a U.S. military base, which was installed in partnership with Beachside Solar. Currently undergoing certification at the Japan Electrical Safety & Environment Technology Laboratories (JET) is a new four-meter long module (200 Wp), a PowerFLEX BIPV system Global Solar has specially designed for the Japanese market, complete with a back junction box for seamless integration into various roofing systems. That system, and two- and six-meter modules (100 Wp and 300 Wp, respectively), are already UL and IEC certified.