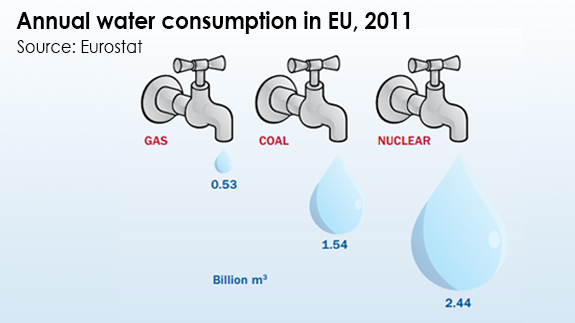 Nuclear, coal and gas plants in Europe use 4.5 billion m³ of water a year, equivalent to that of 82 million EU citizens – the same as the population of Germany – new research shows. Energy production represents 44% of the EU’s total water use: more than any other activity.

Yet wind energy, which uses no water, avoids the use of 1.2 billion m³ of water per year , representing savings of €2.4 billion says the report released today by the European Wind Energy Association (EWEA) at its annual event in Barcelona.

“Water equivalent to over three Olympic size swimming pools is consumed every minute of every day of the year to cool Europe’s nuclear, coal and gas plants”, pointed out Ivan Pineda of EWEA. “Increasing our use of wind energy will help preserve this precious resource far more effectively than any ban on watering the garden– while saving us money”.

Heads of state and government meeting on 20-21 March to discuss a 2030 climate and energy policy should take this research into account: boosting wind and renewable energy via an ambitious and binding renewable energy target for 2030 will have major benefits for the environment, as well as promoting green growth and jobs in a leading European industry.