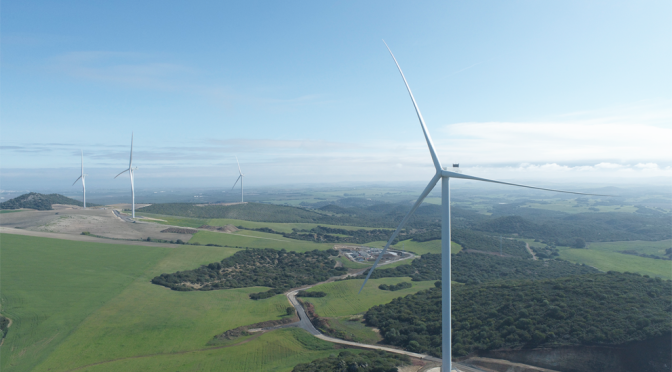 Both parties will promote beneficial actions for the residents of the Coruña town during the construction and operation of nine wind farms.
This initiative combines the company’s contribution to the decarbonisation of the economy and the transformation of the energy model, through the start-up of renewable energy facilities, with its desire to promote the growth of the regions, relying on local talent and promoting its social, industrial and business fabric.
Banzas, Maragouto, Troitomil, San Cosmeiro, O Vao, Alvite I and II, Barrosino and Vilartoxo will combine a total capacity of 262 MW and its construction will involve an investment of more than 320 million euros, as well as the creation of more than 1,250 jobs in rural settings during peak construction periods

Capital Energy, a Spanish energy company founded two decades ago and whose vocation is to become the first vertically integrated 100% renewable operator in the Iberian Peninsula, strengthens its commitment to the social and economic development of Galicia, a fundamental community in the consolidation of its project of clean energies.

Thus, the company has signed with the Lousame City Council the third collaboration agreement in the region linked to its Territories Project, after those signed with the Community of Neighborhood Forests in Common Hand (CMVMC) of Fontemourente and with the Baralla City Council. This initiative combines the group’s contribution to the decarbonisation of the economy and the transformation of the energy model, through the start-up of renewable energy facilities, with its desire to promote the growth of the different territories, relying on local talent and promoting the social, industrial and business fabric of each area.

With this particular agreement, linked to the commissioning of a transformer substation in the town of A Coruña, Capital Energy is committed to promoting, from the construction of the Banzas, Maragouto, Troitomil, San Cosmeiro, O Vao, Alvite I and II, Barrosino and Vilartoxo -which will evacuate part of the clean energy produced in said infrastructure-, different actions agreed upon by both parties and that will be adjusted to the needs of Lousame. These will be framed in specific lines of action, among which are the improvement of infrastructures and services, connectivity and digitization, protection of artistic and cultural heritage, education, health and social and labor integration of disadvantaged groups. In fact, some beneficial initiatives for the inhabitants of the council are already being considered, such as the implementation of measures aimed at promoting energy savings in municipal lighting and the renovation of part of the roads near the parish.

The collaboration between the council and the company will also continue in the operation and maintenance phase of the aforementioned renewable facilities, since they will continue to carry out actions that meet the aforementioned requirements. Through this agreement, all parties reaffirm their interest in contributing to the sustainable development of Lousame, through actions that guarantee an effective improvement in the quality of life of the residents and the environment.

The construction of these wind farms and their evacuation infrastructures, located -in addition to Lousame- in the municipalities of Mazaricos, Outes, Negreira, A Baña, Santa Comba, Val do Dubra and Brión, will involve an investment of more than 320 million euros, as well as the creation of more than 1,250 jobs during the peak periods of the works. In the operation and maintenance phase, they will provide stable and quality employment to more than 30 professionals in the area and will also contribute to generating approximately 25 indirect jobs.

On the other hand, these renewable installations will contribute, annually and throughout their useful life, some 850,000 euros to the local coffers and will contribute to the GDP with more than 6 million euros per year. To this recurring amount will be added the punctual payment of the ICIO, which will be above 8 million euros.

The Territories Project, a differential value

Through the Territories Project, Capital Energy wants to articulate its commitment to sustainable development, become one more neighbor of the regions in which it is present and contribute to their social and economic growth.

To achieve this, the company undertakes to allocate specific economic items, during the construction and operation phases of its renewable facilities, to the materialization of actions agreed upon with the different local interest groups. As a result of this differential approach, the group will consider the particularities and needs of each one of the regions in the selection of these initiatives.

With these actions, Capital Energy confirms that it wants to accompany the development of its renewable energy projects in Spain and Portugal with the launch of social and environmental action programs, adapted to local needs, to maximize its contribution to the socioeconomic progress of all territories. in which it operates.
Social commitment with Galicia

The agreements with the CMVMC of Fontemourente and with the municipalities of Baralla and Lousame are added to other social initiatives that the company has promoted in Galicia, fundamentally linked to the support of disadvantaged groups.

Among them is the signing of a framework agreement with the Association of People with Disabilities da Bisbarra de Muros (Adisbismur), whose purpose is to promote projects that favor employment, social welfare and the integration of people with disabilities in the region, and that has materialized in a first economic support project for said association for the start-up of a self-consumption installation in its occupational center in the Outes council.

In addition, the company has donated material, furniture and economic funds to the A Barcala Foundation for the Mentally Handicapped, belonging to the Negreira and A Baña councils and of which both councils are patrons, and has rehabilitated, in collaboration with the association without for-profit Amicos, the so-called Ruta das Fervenzas, which runs between Outes and Mazaricos.

In line with its commitment to the ecological and fair energy transition, Capital Energy currently has a portfolio of wind and solar projects in the Iberian Peninsula that exceeds 30 gigawatts (GW) of power, of which more than 8.5 GW already have network access permissions granted.

Capital Energy has completed its strategic objective of being present throughout the entire renewable generation value chain: from development, where the company has a consolidated position thanks to its 20-year history, to construction, production, storage , operation and supply. The company has 15 offices in Spain and Portugal where nearly 360 employees work.