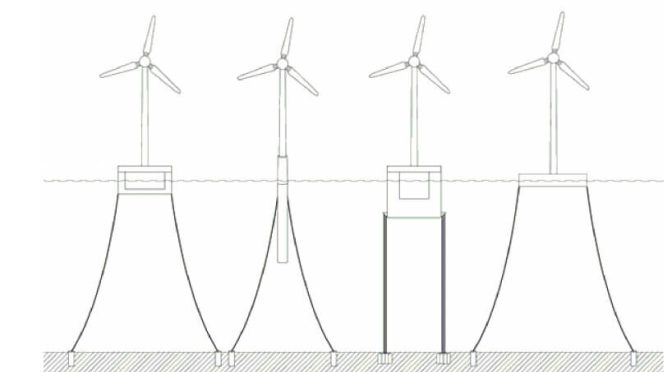 Despite the fact that Spain is the fifth country in the world in terms of installed wind power, if we talk about offshore wind power (or marina) we realize that there is still everything to do.

The main reason is the technical complexity (but also the economic effort) involved in installing wind turbines of this type in our country. And the fact is that, contrary to what happens in the waters of many of our European neighbours, in Spain we do not have a suitable continental platform for this type of technology: as soon as we move away from the coast, the depth of the waters increases noticeably, which prevents the installation of wind turbines fixed to the seabed.

The consequence is that, with few exceptions, Spain needs to use floating wind turbines if you want to develop your offshore wind potential. And this technology, unlike the one anchored to the marine subsoil, requires greater economic investment and is still in the process of development. To sample, a button: only 0.4% of the offshore megawatts installed in Europe are currently floating technology.

But this situation has a positive side. Making a virtue of necessity, Spain has positioned itself as a power in the research of floating wind energy technologies. The challenge is not small: develop effective and competitive solutions to get large wind turbines to operate in places with very deep water.

In order to have a complete picture of the situation in Spain at the level of research in this area, we have spoken with David Carrascosa, Chief Operations Officer of SAITEC Offshore, a Basque engineering company that is currently in full development of its own concept of “float” for wind turbines.

Despite not having a single wind farm installed in its waters (with the exception of a 5-megawatt prototype in the Canary Islands), Spain occupies a privileged position in the development of float patents for offshore wind turbines. According to data from the beginning of 2021 from EIT Innoenergy, 8 of the 34 patents identified worldwide had been developed in our country.

“Yes, it is true that right now that is the number that you hear the most, but given the activity that the sector is currently experiencing, each congress talks about a different one. Currently there is even talk of about 100 designs, each of them in a state of development, more or less immature. Although when you start to analyze technologies that have gone through a development process in the office with numerical models and on test benches, the figures are reduced,” says Carrascosa.

“In addition, the curious thing about Spain is that we not only have a good representation in terms of quantity, but we also have technologies developed in practically each of the groups or types of floating platform. We have solutions such as spare, tlp, semi-submersible, barge … and also solutions in steel and concrete”, he adds.

As he explains, “there is no secret why Spain is so well positioned in this technology.” The reason is simply that “in Spain there are very valid engineering companies with a lot of innovative activity. For example, if we look at the number of projects with European funding in the field of energy, you would be surprised to see the percentage of projects financed in Spain. There are many more than we would be entitled to per inhabitant”, he points out.

Beyond talent, where Spain also has a competitive advantage is in the availability of test benches. “We have several research centers, such as the wave tank of the Hydraulic Institute of Cantabria or the Canal del Pardo in Madrid. Not many countries have this type of infrastructure. Furthermore, if we take the leap and go from tank tests or in the laboratory to tests on larger scales, we have not one, but two open water test platforms such as BIMEP and PLOCAN, all of which means that there is indeed a call to innovate, at least in the most initial phases”.

Of course, we cannot forget another important factor such as the need itself, since, as we have mentioned, if one day there are wind farms in Spain they will be floating technology. “In addition, now this need for technological development has been aligned with the political declaration, with the presentation of the Offshore Wind Roadmap and the announcement of the first auction in our country,” he adds.

SAITEC Offshore’s is undoubtedly one of the most advanced designs at the development level, especially since a full-scale prototype is in the process of being commissioned. This prototype assembles a 2-megawatt wind turbine, small for what will be installed in this decade, where wind turbines of about 15 megawatts will be the norm, but it is still a commercial-scale wind turbine that allows tests to be carried out in real operating conditions.

SAITEC has recently launched the prototype in the port of Bilbao and expects to transport it to the final testing location, at BIMEP, during the month of September. In addition, the company already has a design for 15 megawatt wind turbines with a very high level of detail and has presented two projects to build pilot wind farms on the Basque coast and the Costa Brava.

The PivotBuoy concept from the company X1 Wind is another of the most promising concepts. Like SAITEC, it is currently in the process of starting up its prototype, although this time it is a smaller-scale project. We are talking about a 225 kilowatt power protype, which also has a very particular feature: the wind turbine works downwindthat is, the wind comes from behind the nacelle (nacelle in English), contrary to common designs in the industry.

X1 Wind also has its prototype afloat, which is now ready to be taken to the final location at PLOCAN. In addition, the company is currently working on a design for 6 megawatt wind turbines and ensures that it is scalable above 15.

The W2Power concept of the company EnerOcean was at the time the first floating wind platform in Spain and the first in the world with two turbines. The prototype had two wind turbines of 30 kW each and successfully completed 4 months of testing on the PLOCAN test platform. Its main feature is the possibility of housing two turbines.

The company is currently immersed in the challenge of commercializing the technology, with two versions designed for total powers of 12 and 20 megawatts per platform. They have even presented a project to build two wind farms in the Canary Islands using this technology.

In addition to those mentioned above, there are other designs developed in Spain, although some of them are inactive or have a lower degree of maturity. This is the case of WindCrete (Polytechnic University of Catalonia), Nautilus (Tecnalia), FLOCAN (Cobra), TLPWind and Flagship (Iberdrola) or TELWIND (Esteyco).

One of the most difficult steps is making the leap from the research phase to the commercial phase. That is, to build a large-scale park with one of these emerging technologies. “In this sense, our commitment from SAITEC Offshore is to support the development of offshore wind power in various ways. Of course, there have to be commercial auctions as soon as possible, but a commercial project takes many years of development, installation and construction”, says David, referring to the 2030 Roadmap set by the Ministry, the year for which Spain has the objective of have 3 gigawatts of offshore wind power in operation.

“Since SAITEC Offshore we think that in parallel pre-commercial auctions should be promoted. That is, to finance smaller projects, of about 50MW, through a specific rate. This allows much faster processing and construction, stops the supply chain and prevents the integration of offshore wind power in our country from 0 to 100. It would be an intermediate step for all the agents involved such as administrations, fishermen, environmental organizations, etc. they can adapt and get to know the technology”.

For the moment, the next steps that the Ministry has announced in offshore wind power are the publication of the Maritime Space Management Plan (POEM), which will identify the installation areas for this type of park, and the holding of the first offshore wind auction in early 2023.