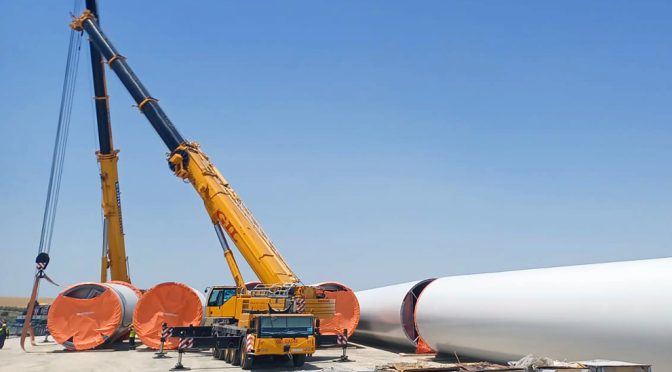 The Junta de Andalucía grants the pending administrative authorizations to the high voltage line that will transport the wind energy.
The construction of Pinarejo I and II, both located in the municipality of La Puebla de Cazalla and which add 60 megawatts (MW) of power, will start this year and will lead to the creation of around 190 jobs in the peak periods of the works and will mobilize a combined investment of more than 60 million euros

Seville, July 18, 2022.- Capital Energy, a Spanish energy company born two decades ago and whose vocation is to become the first vertically integrated 100% renewable operator in the Iberian Peninsula, continues to give relevant passes in order to materialize the start-up of its clean energy project in Andalusia, and more specifically in the province of Seville.

The Junta de Andalucía has just granted the three pending administrative authorizations – Unified Environmental (AAU), Prior (AAP) and Construction (AAC) – for the high-voltage line that will feed the electricity generated by the Sevillian wind farms into the grid Pinarejo I and II, which will be located in the town of La Puebla de Cazalla and which already had these official permits.

After passing this important administrative milestone, both these renewable projects and their evacuation infrastructure face the final stretch of their respective procedures, since they only need to obtain the respective building and installation licenses.

Pinarejo I will have a capacity of 36 megawatts (MW), distributed among seven wind turbines, and will be able to produce around 85,000 megawatt hours (MWh) of clean electricity per year, the equivalent of the consumption of more than 32,000 Andalusian homes. It will also prevent the annual emission of almost 32,000 tons of CO2.

The construction of this wind farm will involve the creation of almost 110 direct jobs during peak periods, as well as an investment of 40 million euros. The operation and maintenance of Pinarejo I will provide permanent employment to five professionals in the area and will favor the creation of approximately four indirect jobs.

This renewable installation will generate, annually and throughout its useful life, a fiscal impact of around 100,000 euros to the local coffers, which will also receive the punctual payment of the ICIO and other fees, for an amount of around 700,000 euros. Finally, it will contribute approximately 800,000 euros a year to GDP.

For its part, Pinarejo II will have four turbines and an installed capacity of 24 MW. It will be able to generate nearly 60,000 MWh each year, enough to satisfy the consumption of almost 23,000 homes, also avoiding the emission of more than 22,000 tons of CO2 into the atmosphere.

Its construction will mean the creation of almost 80 direct jobs during the peak periods of the works and will mobilize an approximate investment of 23 million euros. In the operation and maintenance phase, it is expected to provide stable and quality employment to three professionals in the area and contribute to generating two indirect jobs.

On the other hand, Pinarejo II will have a contribution to GDP throughout its useful life equivalent to 550,000 euros per year and an annual tax contribution to local coffers of about 66,000 euros. To this recurring amount will be added the timely payment of the ICIO and other fees, which would amount to around 400,000 euros.
Firm commitment to Andalusia

Capital Energy has one of the nerve centers of its ambitious clean energy project in Andalusia. Not surprisingly, the group develops more than 1,600 MW, both wind (approximately 1,050 MW) and photovoltaic (close to 600 MW), in this community, one of whose main strengths is the quality of its renewable resource, which is above the national average and that very few regions can match.

During the operation and maintenance of these facilities, Capital Energy would provide permanent and quality employment to around 200 Andalusian professionals and would generate an annual economic impact, through local and regional taxes, of nearly 5 million euros. It would also contribute to the GDP, each year, more than 33 million euros.

With this renewable capacity, the company would be capable of producing 4,000 GWh of clean electricity per year, equivalent to the energy consumption of more than 1.5 million homes, and would avoid the emission of almost 1.5 million tons of CO2 into the atmosphere.

The locations of these facilities, in six of the eight Andalusian provinces -Almería, Cádiz, Granada, Huelva, Málaga and Seville-, have been selected after carrying out a multi-criteria analysis of all the variables involved -environmental, technical, urban, heritage, social , etc.- and after carrying out an extensive bibliographic review of all current legislation and regulations. The ones with the most megawatts and installations are Granada (564 MW and nine projects) and Almería (460 MW and eight). They are followed by Malaga (207 MW and five), Seville (201 MW and eight), Cádiz (137 MW and four) and Huelva (49 MW and two).

These figures show that Capital Energy wants to become a driving force for the social and economic development of Andalusia. It is about reconciling two objectives: that of contributing to the decarbonisation of the economy, through the implementation of renewable energies, and that of promoting the economic and social growth of all the territories in which it operates.

In line with this vision, the company has created the Territories Project, a differential initiative that combines its commitment to transforming the energy model and its desire to promote the development of communities. To this end, it undertakes to launch actions agreed with local interest groups that will be framed in specific lines of action, among which are the improvement of infrastructures and services, connectivity and digitization, protection of artistic and cultural heritage, education, health and socio-labour integration of disadvantaged groups.

The renewable group has already signed two agreements in Andalusia linked to the Territories Project with the municipalities of Lebrija, a Sevillian municipality where it is finalizing the start-up of the Loma de los Pinos wind farm, and Jerez de la Frontera, a town in Cadiz where it is building the El Barroso wind farm. Through both agreements, the company and the councils are already implementing actions that improve the quality of life of the residents. Likewise, Capital Energy is working with the municipalities of Jerez and Ayamonte to encourage the hiring of local workers in the construction of the facilities.

Capital Energy, which already has more than 30 employees in Andalusia and has offices in Seville and Granada, from which it deals with the growth of its clean energy project in the region, is also committed to the development of new storage technologies and to green hydrogen.

In line with its commitment to the ecological and fair energy transition, Capital Energy currently has a portfolio of wind and solar projects on the Iberian Peninsula of around 30 gigawatts (GW) of power, of which more than 8.5 GW already have network access permissions granted.

Capital Energy has completed its strategic objective of being present throughout the entire renewable generation value chain: from development, where the company has a consolidated position thanks to its 20-year history, to construction, production, storage , operation and supply. The company has 15 offices in Spain and Portugal where nearly 360 employees work.