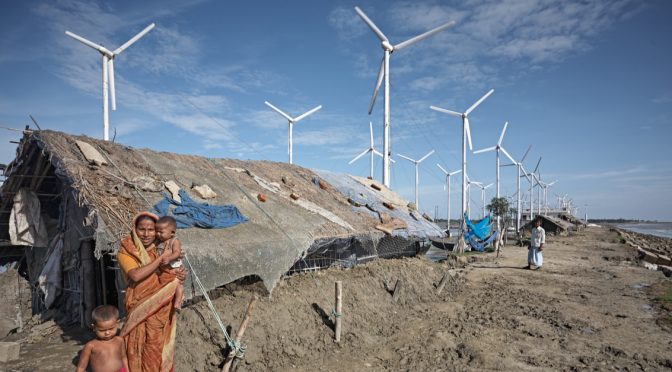 India has large coal reserves and will need coal as an energy source for decades. Fortunately, the country also has 300 sunny days a year. If India is to achieve its climate goals, it is crucial that growth in energy production come from renewable sources.

India has low greenhouse gas emissions per capita, but because the country is so populous, it has the third-highest total emissions in the world, surpassed only by China and the United States. What India is doing to curb climate emissions is important not only for the country itself, but also for global climate goals.

With a rapidly growing population and a long-awaited improvement in living standards, energy demand in India will increase sharply in the coming years. The big question is how will this energy be produced in the future: with even more coal or with renewable energy?

At the UN climate conference COP26 in Glasgow in 2021, Indian prime minister Narendra Modi presented new and more ambitious climate goals. He said that India would increase its renewable energy production to 500 gigawatts and thus meet the requirement that 50 per cent of energy needs would be met by renewable energy by 2030.

India will also reduce its total CO2 emissions by one billion tonnes by 2030. While many industrialised countries have stated that they will reach the goal of net zero emissions by 2050, India has said that it will not reach this goal until 2070, the same as China.

According to the International Energy Agency (IEA), 80 per cent of India’s energy needs today are met by coal, oil and solid fuels. Coal has made it possible to increase power production and develop industry, and coal is still the largest and most important source of energy. Oil consumption and oil imports have grown rapidly because more and more Indians are buying cars and because road transport is increasing.

“Making the energy sector greener is important for India, but the availability of affordable and reliable energy is a challenge in itself,” points out Statkraft’s country manager in India, Rahul Varshney.

“India has large coal reserves, and many of the coal power plants are relatively new. They are efficient, ensure a secure energy supply and make India less dependent on imported oil and gas. This makes it challenging to phase out coal.”

Growth in coal power however has levelled off, and new energy production comes mainly from renewable sources such as wind and solar. As wind and solar power are becoming increasingly affordable to develop, growth in renewable energy is not primarily driven by a desire to make India “greener”. Renewable energy is being developed because it pays off.

The costs of energy development are crucial. India is an emerging economy, and people have more fundamental challenges in their daily lives than worrying about global climate issues. Most Indians will not be willing to pay a higher price for renewable energy just because it is “clean”, but as long as clean solar energy is cheap at the same time, there will be no discussion.

At the beginning of 2022, Statkraft has one solar energy project under construction and several more under development in India. The potential for solar energy is immense in India, the country’s ambitions are high, and political support and cheaper technology have quickly made solar energy the best option for new power production.

Recent IEA analyses show that India already in 2018 invested more in solar energy than in all fossil sources combined.

“In Statkraft we have changed our solar strategy for India. We have moved away from investing in smaller, distributed solar energy companies and toward developing large projects instead. We will continue to look for more investment opportunities because we want to be a positive contributor to India’s power sector,” says Varshney.

Pollution is a problem in India

Another driver of the green shift in India is the extreme air pollution, especially in the major cities. Eleven of the world’s twelve most polluted cities are in India. This has many and complex causes, but the coal industry is one factor, along with emissions from the transport and construction sectors.

As more and more Indians are lifted out of poverty, the population and greenhouse gas emissions increase. Greater awareness of the pollution problem has also helped strengthen the focus on emission cuts and cleaner air. The green shift is no longer a matter of choice, but rather necessity.

Electrification helps to reduce pollution from households traditionally using wood as fuel. In April 2018, India’s prime minister Narendra Modi announced that all villages in India had been connected to the power grid. Since 2000, half a billion people have gained access to electricity. The International Energy Agency characterises this development as an unparalleled historic achievement.

But power consumption is still modest. Every single Indian uses only about 1 200 kWh a year. In comparison, the average consumption in China is between 5,000 and 6,000 kWh, and more than 10,000 kWh in industrialised countries.

In recent years, India has lifted millions of people out of extreme poverty, and this positive trend is expected to continue. India’s electricity consumption is likely to grow rapidly due to population growth, rising living standards and further electrification.

Statkraft is not the only company that sees great opportunities in India, but the company has some competitive advantages: long experience with renewable energy sources, a strong financial position and expertise in power trading. This means that customers perceive Statkraft as a reliable and safe company.

Statkraft’s expertise in energy management can also be valuable in India, where the integration of variable power sources in the grid is becoming increasingly important as the share of renewable energy increases.

India has a strong self-interest in helping to find good solutions to global climate problems. Reports from the UN Intergovernmental Panel om Climate Change show that the consequences of global warming affect countries differently, and India is one of the countries most likely to be negatively impacted by droughts, heat waves and rising sea levels. This can lead to insecure food supply, high food prices, migration and reduced income.

However, it is obvious that the solution to the climate crisis cannot be to stunt the growth of living standards for poor people. The only answer is to ensure that economic growth and increased prosperity are driven by affordable renewable energy accessible to everyone.

Statkraft entered the Indian market in 2004 and was the first foreign company to invest in the country’s hydropower sector.

In 2018, the company acquired the Tidong hydropower project. When completed, it will produce 414 GWh annually, which corresponds to the consumption of 345,000 Indians.

Statkraft has solar energy projects totalling 150 MW in development and under construction in India and wants to develop more wind and solar power in the country.

Statkraft Markets was established in India in 2012 and engages in power trading for both Statkraft and third-party customers.

“The potential for renewable energy is enormous in India, and this is a great opportunity for Statkraft.” Vikas Garg Director Business & Project Development

Rahul Varshney is Statkraft’s country manager in India, based in the country’s capital New Delhi.