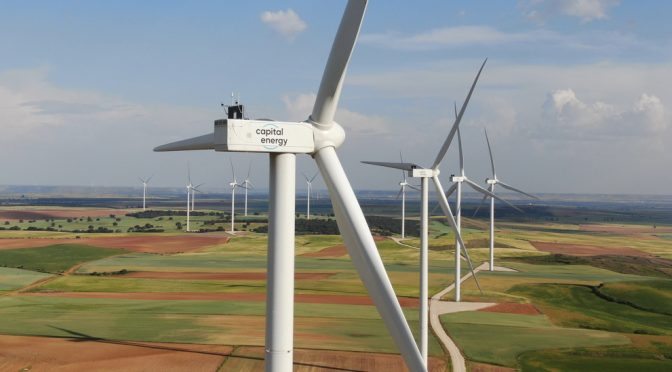 The company last the start of the works of this Onubense project, which will involve an investment of around 30 million euros
The wind farm, which will be built by the Spanish company CRC, will have an initial power of 27 megawatts (MW) and its six wind turbines, of the General Electric Cypress model, will supply clean energy at about 33,000 Andalusian homes and avoid emission to the atmosphere of more than 32,000 tons of CO2 a year
Sito in the municipality of Ayamonte, this renewable facility, the third wind farm that Capital Energy will build in Andalusia, will have a contribution to GDP throughout its useful life equivalent to about 700,000 euros a year and a tax contribution to local coffers ( Ayamonte and Villablanca) equivalent to more than 400,000 euros per year
Andalusia is a key pillar of the development of the 100% renewable Project of Capital Energy: the company promotes more than 1,600 MW wind and solar in this region, whose start-up will involve the investment of about 1,100 million euros

Huelva, November 15, 2021.- Capital Energy, Spanish Energy Company born in 2002 and whose vocation is to become the first 100% renewable operator vertically integrated from the Iberian Peninsula, continues to strengthen the development of its clean energy project in Andalusia: The procedures for the beginning of the construction of its third wind farm in this Autonomous community, Ayamonte is already finalized.

Ayamonte is also going to convert, in addition, in the first park that Capital Energy will assign to the capacity obtained in the auctions of renewable energy convened by the MITECO on January 26 and October 19 this year: around 2,200 megawatts (MW) , fundamentally wind.

Located in the province of Huelva, the Ayamonte wind farm will have an initial power of 27 MW and its six wind turbines, of the General Electric Cypress model, 158 meters from rotor diameter and a hub height of 121 meters, will be able to supply More than 80,000 megawatts (MWh) annual clean energy, equivalent to the consumption of about 33,000 homes in the region.

It should be noted that a good part of the wind turbines will be built in various factories with which GE works in Spain: both the blades, which will be the largest manufactured one-piece in a commercial project worldwide and will be carried out in Castellón on the part of the company LM Wind Power, such as towers and other electrical and mechanical components. The arrival of the teams is scheduled for July 2022.

Capital Energy and GE have also signed a complete after-sales service for the monitoring and preventive and corrective maintenance of such machines for a period of 20 years.

Sito in the homonymous Onubense municipality, the development of this project will involve an investment of around 30 million euros and its construction will be charged CRC. This Spanish infrastructure company, founded in A Coruña in 1940, will carry out engineering, supply, construction and start-up work of this new installation of renewable energies, as well as its evacuation infrastructures.

The Ayamonte Park will promote the creation of more than 100 direct jobs during the tip periods of its construction. In the operating and maintenance phase, it is expected to give permanent employment to four professionals in the area and also contribute, to generate about 10 indirect jobs.

On the other hand, this renewable infrastructure, capable of avoiding the emission to the atmosphere of more than 32,000 tons of CO2 per year, will have a contribution to GDP throughout its useful life equivalent to about 700,000 euros per year and a contribution Attorney to local coffers (Ayamonte and Villablanca) equivalent to more than 400,000 euros per year. To this recurring amount will be added the timely payment of the IIC, which could exceed one million euros.

Andalusia is essential for the development of the Clean Energy Energy Project. Not in vain, the company promotes more than 1,600 megawatts (MW), both winds (almost 938 MW) and solar (approximately 734 MW), in this Autonomous Community, one of whose main strengths is the quality of its renewable resource, which is Above the national average and that very few regions can match. The start-up of all this power would mean an investment greater than 1,100 million euros.

In total, capital Energy is promoting the construction of 34 renewable projects, 22 winds and 12 photovoltaic, in six Andalusian provinces: Almería, Cádiz, Granada, Huelva, Málaga and Sevilla. The ones that most megawatts and facilities have are Almeria (500.5 MW and nine projects) and Granada (394 MW and four). Sevilla (307 MW and eight), Málaga (279 MW and seven), Cádiz (143 MW and four) and Huelva (48.5 MW and two).

The company advances in the works of its first wind farm in Andalusia: Loma de los Pinos, equipped with an installed capacity of 39 MW and located in the Sevillian town of Lebrija. This renewable installation, whose operating entry is scheduled for the first semester of 2022 and already has a long-term energy sale contract (PPA), will equip turbines from General Electric.

Its seven wind turbines, which are already reaching the location, will generate 103,000 hour megawatts (MWh) per year, sufficient to supply clean electricity to 40,000 Andalusian homes. Loma of the pines will also avoid the annual emission to the atmosphere of more than 41,000 tons of CO2.

In this context, and in line with the Commitment of Capital Energy with the socio-economic development of the rural territory, the company has just released its project territories by signing a collaboration agreement with the City Council of Lebrija. The agreement, which seeks to establish a long-term relationship, remembers the commitment to the sustainability of both parties, which will analyze, in the coming months, different actions of a social and environmental nature that may be of interest to the locality.

Likewise, Capital Energy has awarded ELECNOR to the construction of its second wind farm in the community, the Barroso. Located in the Gaditanian municipality of Jerez de la Frontera, it will have an initial power of 22.5 MW and its five wind turbines, of the General Electric Cypress model, they will be able to supply about 65,000 MWh annual clean energy, equivalent to the consumption of Some 27,000 households in the region, and also avoid emission into the atmosphere of more than 25,000 tons of CO2 per year.

The construction of both wind farms will entail a joint investment of more than 66 million euros, the creation of around 370 direct jobs during the tip periods and a combined fiscal contribution of more than one million euros. In the operating and maintenance phase, it is expected to give permanent employment to 13 professionals in the area and generate an annual economic impact (IBI and IAE, mainly), as well as through lease contracts, greater than 400,000 euros .

It should also be highlighted that Capital Energy has signed a collaboration agreement with the Jerz City Council to promote the hiring of local labor linked to the construction of this park.

Around 35 GW portfolio on the Iberian Peninsula

In line with its commitment to the ecological and just energy transition, capital Energy currently has an Iberian Peninsula with a portfolio of wind and solar projects that Round 35 Gigavatios (GW) of power, of which more than 8,7 GW already have the network access permits granted.

Thanks to the launch of its marketer, in the last quarter of 2020, Capital Energy has completed its strategic objective of being present throughout the entire value chain of renewable generation: from the promotion, where the company has a given consolidated position Its trajectory of almost 20 years, until construction, production, storage, operation and supply.

The objective of the company, which has more than 390 employees distributed over 15 offices in Spain and Portugal, is to bring to the final consumer 100% renewable energy that is already producing in their own facilities.