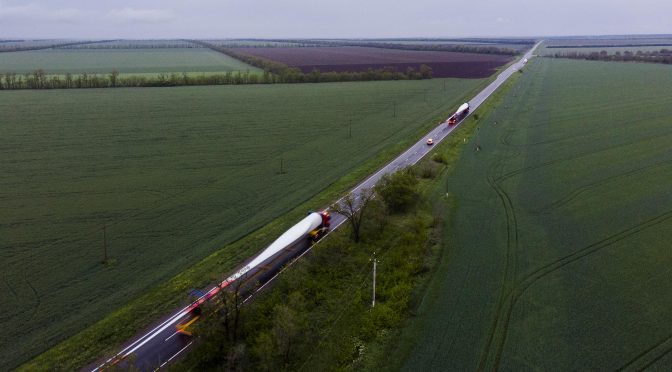 «We are glad to welcome our guests at this historic moment for our company. Two years ago, we laid the first stone here and today we met together again to give an official start to the first Enel’s wind farm in Russia. I express my deep gratitude to all those who laid the foundation for renewable energy in the country, in the region, as well as to everyone involved in the construction of our first “green” generation facility», – commented Stéphane Zweguintzow, General Director of Enel Russia.

«The country possesses effective mechanisms of support of renewable energy sources. In 2020, around 1 GW of new renewable capacity was commissioned, which is 82% more than in 2019. And the majority of the renewable objects commissioned in 2020 are wind power plants. Today Russian companies are not only operating in the internal market but are also successfully representing domestic industry at the global renewable energy markets. It was decided to extend the renewable energy support program until 2035. According to preliminary calculations, within the framework of the program in 2023-2035, it is expected to commission renewables-based generation with a total installed capacity of more than 6.7 GW», – said Aleksander Novak, Deputy Prime Minister of Russia.

«The Rostov region has already become the first in the Russian Federation in terms of installed wind power generation capacity, but we do not intend to be ready to rest. Commissioning of Azovskaya WPP will allow to add 90 MW of installed capacity, and overall, this year on the Don, it is planned to commission wind farms with a total capacity of 260 MW. The new wind farm brings the Rostov region one step closer to the goal of becoming the leading region of the Russian Federation in wind energy», – commented Vasiliy Golubev, Governor of the Rostov region.

The power plant was put into commercial operation on May 1st, 2021. The right to sell electricity and capacity on the Wholesale Electricity and Capacity Market was granted in full amount after receiving a notification from the Administrator of the Wholesale Electricity and Capacity Market Trading System (ATS), as well as after receiving the confirmation of compliance with localization requirements. This allowed Enel Russia to start receiving a 100% capacity payment from June 1st, 2021.

The Azov wind farm (90 MW) became the first wind power plant of the Unified Energy System of Russia, where the technology of remote control of both active and reactive power of generating equipment was introduced. Previously, this technology was used in Russia only at solar power plants. Remote control of the reactive power of the Azov wind farm creates an additional tool for emergency control and optimization of the electric power modes of the Unified Energy System of the South due to the operational regulation of voltage levels in the nodes of the electric network. Remote control also makes it possible to optimize the scheme of operational maintenance of wind power plants without the need for constant duty of operating personnel at the station.

Construction works were carried out by Enel Green Power, the Group’s business line dedicated to the development and operation of renewables around the world. The wind farm is able to generate around 320 GWh of clean energy each year, avoiding the annual emission of around 260,000 tons of CO2 into the atmosphere. The project consists of 26 turbines spread across 133 hectares.

Actual capital expenditures for the construction of Azov wind farm amounted to approximately 135 million euro, Enel Russia’s initial estimations were at the level of 132 million euro. The Eurasian Development Bank (EDB) provided financing for the construction of Azovskaya WPP – an important stage in the implementation of the EDB’s large program for financing renewable energy sources. The Bank provided a long-term loan of 9 billion rubles.

The commissioning of the Azov wind farm into commercial operation is an important step for the company on its way to a sustainable business transformation towards reducing its carbon footprint and allows it to contribute to the strategy for the development of renewable energy sources in Russia.

Besides Azovskaya WPP, Enel Russia is developing two more projects in the field of wind generation: Kolskaya WPP (201 MW) in the Murmansk region and Rodnikovksya WPP (71 MW) in the Stavropol region.

Overall volume of investment in three wind farms will amount to around 498 million euros, what underlines the strong commitment of Enel Russia to contribute to meeting the UN Sustainable Development Goals (SDGs) goals, including SDG 12– Ensure sustainable consumption and production patterns and SDG 13 – Climate action.