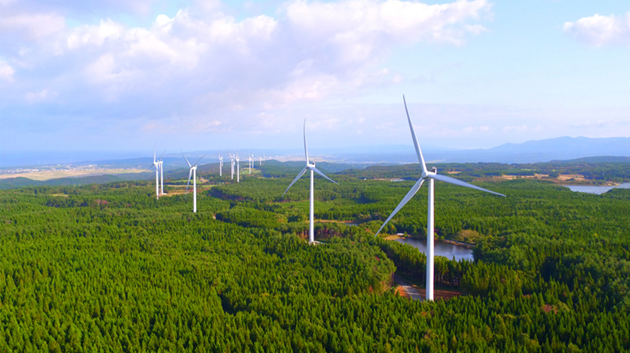 The wind energy project includes the supply of 79 wind turbines in the largest wind complex in the country, located on the island of Hokkaido, in northern Japan.
With this project, Siemens Gamesa strengthens its collaboration of more than two decades with Eurus Energy, the main independent promoter of renewable energies in Japan.
These turbines have been specifically designed to be typhoon-proof to withstand the strong winds of Japan.

Siemens Gamesa will supply 79 of its industry-leading Typhoon-class onshore wind turbines for Japan’s largest wind farm cluster, strengthening its position as one of the leading renewable energy players in the country. The 339.7 MW* Dohoku wind farm cluster consists of four projects to be developed by Eurus Energy, the country’s leading independent renewable energy developer.

Siemens Gamesa will also provide technical field assistance for construction and commissioning of the four wind projects, with expected full commissioning in the second half of 2023. Given that Japan faces very high wind speeds, including typhoons, Siemens Gamesa specifically designed the typhoon-proof onshore turbines based on proven technologies to accommodate the local wind site conditions.

“We’re the first company in the industry that has developed 4.3 MW typhoon type certified onshore turbines, which also achieved site-specific Wind Farm Certificate for several Japanese projects too. Equipped with the strongest T-class turbine in the market, we are very pleased to supply this milestone giant project to capture the abundant high winds in Japan and extend our partnership with Eurus Energy over the last more than 20 years with projects both inside and outside of Japan,” said Russell Cato, Managing Director of Siemens Gamesa in Japan.

Operating in Japan for more than 20 years with track record of excellence, Siemens Gamesa has developed a full-fledged local set up to build and operate wind farms, which includes 520 MW installed capacity and 353 MW under maintenance and operation.

“With deep roots in Asia Pacific, Siemens Gamesa has developed a world-class manufacturing and supplier base in the region, as well as a capable and growing team on the ground for project execution and maintenance. Leveraging our strength on technology innovation, we are well positioned to join hands with trusted partners to develop renewable energy for the sustainable growth of our society and community,” said Paulo Soares, CEO of Siemens Gamesa’s Onshore business unit in the Asia Pacific region.

Siemens Gamesa has been expanding in Asia Pacific since the 1980s and has installed more than 9.41 GW of onshore turbines in China, Pakistan, Japan, South Korea, Vietnam, Indonesia, the Philippines, Thailand, Australia and New Zealand. On the offshore side, the company completed the installation of Taiwan’s first offshore wind power plant in 2019 (128 MW) and was selected as the?preferred supplier for an additional 3 GW of projects.?