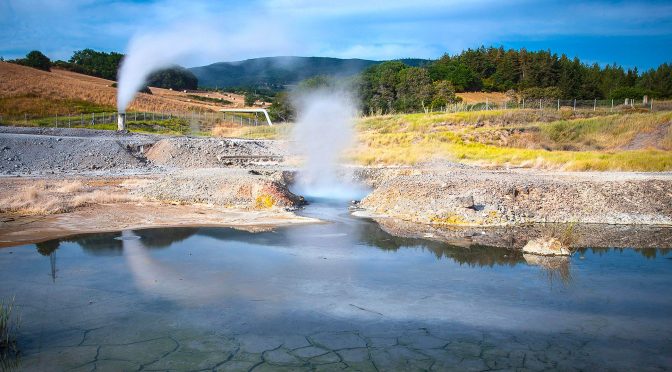 What do geothermal power, a 3D printer, and the circular economy have in common? They are the components of a success story that recently involved Enel’s Santa Barbara metallurgy labs in Cavriglia, near Arezzo, as part of our flagship Geyser project. This project is dedicated to geothermal energy, one of the renewable sources that has been in use the longest; Italy – and Enel Green Power – are leaders in this field. Here is their story.

Geyser’s aim is to optimize the management of geothermal plants, ensuring their sustainability and full functionality, increasing their operational efficiency, and constantly improving their technical and financial performance – all while paying full attention to safety and the environment.

The team working on the project organized a round table of technicians and experts from the geothermal, thermal, and hydroelectric sectors. That is where the idea originated to use a 3D printer for the first time to repair an essential component of a geothermal power plant.

“It all started from our curiosity and desire to use the 3D printer that we had in-house,” says Nicoletta Mazzuca, Enel Green Power’s Project Manager for Geyser, which is developing around 42 initiatives involving over 80 people. “We wanted to repair parts that were going to end up in landfills because they couldn’t be fixed with conventional forging techniques. But, thanks to our colleagues’ passion, competence, and cooperation, we found a solution.”

The solution is located in the Santa Barbara metallurgy labs, at the headquarters of Engineering and Technical Support for Enel Production, where an additive manufacturing machine with Laser Metal Deposition (or Direct Energy Deposition) technology has been available since 2019. This extremely high-tech tool can reproduce and repair various metal parts by depositing the necessary material one layer at a time.

“The fact that the printer is in an area that also has a metallurgy lab provides immense added value. In this way, the additive manufacturing process can be monitored almost in real time, checking the mechanical, chemical, and metallurgical properties of the items manufactured so we can also count on constant feedback,” explains Giulio Andrucci, Technical Leader and coordinator of the Santa Barbara metallurgy lab.

The printer was used to repair an impeller, which is an essential component of the centrifugal compressor of a geothermal plant because it extracts non-condensable gases from the vapor at the end of the expansion process in the turbine. Non-condensable gases contain solid particles and water droplets that impact the blades, wearing out the exterior of the intake profile.

The pilot project began with the purchase of a powdered form of the material used to make the impellers (a special kind of stainless steel called 17-4 PH), followed by laser scans and the creation of the 3D model. The work was carried out by a team led by Gennaro Raniello, Head of Hydro Maintenance Support – O&M Hydro Italy at Enel Green Power, and it concluded with the first historic repair of a worn part thanks to this technology. The result is sustainable innovation that will make it possible to set in motion a cycle of reuse of materials: until now, worn impellers were simply replaced with new ones and ended up in landfills, so repairing them will also save around €70,000 per year.

The economic calculation factors in the restoration of four out of six impellers, on average, that break every year in our geothermal plants. This estimate takes into account that the damage might be too significant in some cases, so two out of six might not be repairable at all. “After a year of work, we were able to use additive manufacturing processes to repair our impellers for the first time. Not only does it give our impellers a second life, it also saves us money while respecting the environment thanks to a circularity of 100%. I am honored to have participated in the creation of this innovative repair process and I would like to thank my colleagues for teaching me so much in such a short time,” added Nicoletta Mazzuca.

“The Geyser project allowed us to introduce and share the competences available in several poles of excellence from Enel’s various supply chains in Italy,” explains Matteo Niccolai, Workshop Maintenance and Technical Services Leader – O&M Geo Italy of Enel Green Power. “The idea of using additive manufacturing to solve one of Geo’s supply chain issues is a concrete example of the effectiveness of sharing problems and best practices transversally within the company, solving critical issues with the help of previously unseen perspectives.”

This is a success story that further enhances the centuries-old history of geothermal power in Italy, where EGP operates the oldest and most innovative power station complex in the world, with 34 plants located in the Tuscan provinces of Pisa, Siena, and Grosseto.