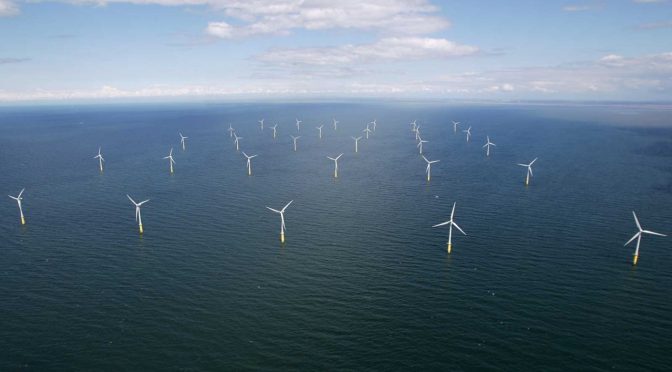 Until now, the plan to power American cities by erecting thousands of giant wind turbines in the oceans off the United States has mostly been an East Coast vision. Developers are busy studying the outer continental shelf and awaiting — or recently celebrating — federal permits to put wind farms from Maine to North Carolina.

The West Coast has lagged behind as the Biden administration pursues its ambitious goal of producing 30 gigawatts of electricity from offshore wind by 2030. The main reason has been geography. The deeper coastal waters of the Pacific make these costly construction projects even more difficult. And the U.S. military’s frequent use of the Pacific Ocean for training and maneuvers has also been a complicating factor.

But the Biden administration and California Democratic Gov. Gavin Newsom announced on Tuesday that they plan to push ahead with West Coast offshore wind by designating two areas off the California coast for future wind energy development. If wind farms in these areas ultimately get approved in coming years they would be the first of their kind on the West Coast.

“Given California’s longtime leadership in clean energy and combating climate change — thank you Gov. Newsom — it’s only fitting that California is totally unwilling to let the expansion that we’re witnessing on the East Coast leave California behind,” Gina McCarthy, the White House national climate adviser, told reporters during a conference call on Tuesday.

One area chosen for wind development is a 399-square mile patch of Pacific Ocean northwest of Morro Bay, on California’s central coast. Biden administration officials said that area could support 3 gigawatts of electricity. The second area is known as the Humboldt Call Area in northern California near the Oregon border that could support 1.6 gigawatts of wind power. Together these future projects could power 1.6 million homes, officials said.

“This is a big deal. And we’re looking to scale this vision,” Newsom told reporters.

Unlike the East Coast turbines that will be affixed to the seafloor, the deeper Pacific waters would require floating turbines.

In the past, the Pentagon has expressed concerns about wind turbines’ potential interference with military training and exercises as well as radar operations.

But Colin Kahl, the undersecretary of defense for policy, said on Tuesday that after extensive negotiations, the Department of Defense was able to support wind development in these areas, particularly because “the world faces a grave and growing climate crisis.”

“I think we got to a place where we think that any negative effects were mitigated and certainly balanced against the imperative of moving in a clean energy direction,” he said. “We at the Defense Department are satisfied that there’s not a trade off between the clean energy goals of this endeavor and our military readiness.”

The Interior Department plans to host a meeting next month of a government task force to discuss the California wind energy plan. A sale of leasing rights to developers is targeted for mid-2022.

There are currently two pilot offshore wind farms operating in the United States — one in Rhode Island, one in Virginia — that combined have seven turbines and produce 42 megawatts of electricity, 14% of Biden’s 2030 goal.

Earlier this month, the Biden administration approved the first large-scale offshore wind farm in the country off Martha’s Vineyard, Mass. The Vineyard Wind project is scheduled to be built in 2023 and 2024 and is expected to have up to 84 turbines, enough to power 400,000 homes, according to company officials.

The Interior Department — which regulates offshore wind farms in federal waters — has committed to processing the other 13 projects that are currently awaiting permits by 2025.

But there are many obstacles to meeting the administration’s goal. Other ocean goers, from cargo boats to commercial fishermen, oppose offshore wind projects in some areas. Environmentalists worry about harm to birds and marine mammals, particularly the critically endangered North Atlantic right whale which migrates through the same swath of ocean where east coast wind farms are planned.