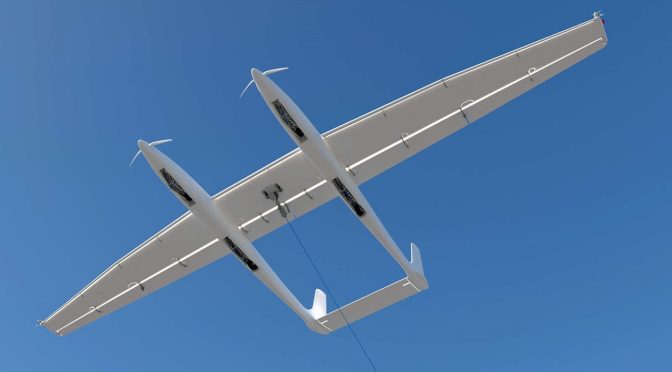 RWE, one of the world’s leading renewable energy players, is to establish its first test centre to investigate the potential of innovative airborne wind energy technologies. Planning permission to build the new facility in County Mayo, Ireland, has now been granted and construction of the site infrastructure is expected to begin later this year.

RWE is delivering the test site in partnership with Ampyx Power, a Dutch company that is developing the innovative wind energy technology. RWE’s test site will first undertake testing, verification and demonstration of a 150 kilowatts (kW) demonstrator system, followed later by a larger commercial-scale 1 megawatt (MW) system. RWE will also test systems from other AWE developers during the eight year operational lifetime of its test centre.

Airborne Wind Energy Systems harness the strong and steady winds at altitudes greater than several hundred metres, and with reduced infrastructure costs. The system being tested by RWE consists of a ground-based winch generator, a launch and land platform, and small, aircraft-shaped device.

The device, which has a 12-metre (about 40 feet) wingspan, is connected to the generator by an ultra-strong tether. It draws the tether from the winch and produces electricity by acting against the resistance of the built-in generator.  Once the tether is fully extended, the device glides back towards the winch, as the tether is reeled back in. Retrieving the tether requires just a fraction of the electricity generated, resulting in net power production. This cycle is performed repeatedly, producing clean, low-cost electricity.

Current Airborne Wind Energy Systems demonstrators have power output capacities between 100 and 200 kW. Developing this technology further could increase the potential output to megawatts, making it attractive for use at large wind farms.

RWE’s test centre is supported by the Interreg North-West Europe funding programme, which was set up by the EU. Its MegaAWE project, of which RWE and Ampyx are partners, was set up to support technology development and commercialization within the airborne wind energy sector.

Ampyx Power, founded in 2009, is one of the leading companies in the emerging Airborne Wind Energy sector. Fabrizio Nastri, CEO of Ampyx Power said: “After 12 years of hard work and multiple generations of smaller prototypes, we are excited to start operating our technology demonstrator on a 150 kW scale in Ireland in a real operational environment. The collaboration with RWE and incorporating their vast experience of wind energy into in our product design is a big step toward commercialising our technology.”

RWE has been in Ireland since 2016 and now has two offices; one in Kilkenny City and one in Dun Laoghaire, County Dublin. In 2018, the company constructed, and now operates the 10 MW Dromadda Beg Onshore Wind Farm, located in County Kerry, RWE’s first onshore wind farm in the country. The Irish development team is exploring further renewable projects and opportunities. A planning application was submitted earlier this year for the 62 MW Lyre Onshore Wind Farm, located on the borders of County Cork.

RWE is developing the Dublin Array offshore wind farm in partnership with Saorgus Energy, which will have an installed capacity of between 600 to 900 MW. RWE is also developing new solar and battery storage projects in Ireland, and recently announced the ‘go live’ of its first European-based battery storage project, at Stephenstown. This is one of two projects being developed, with the second located near Lisdrumdoagh.

“The launch of an airborne wind testing site in Ireland is an early move for RWE into a new technology to generate green electricity. Our demonstration project will give us the opportunity to gain first-hand experience of the technology being developed and to build valuable relationships with the pioneers and innovators of airborne wind. “