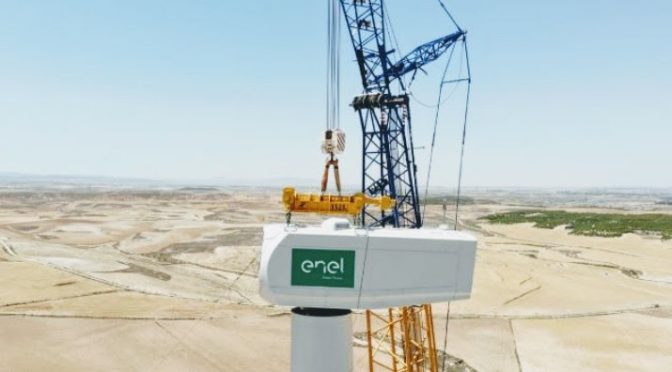 In total, Enel Green Power North America currently has over 2.3 GW of new renewable generation being constructed and will have over 600 MW of battery storage capacity under construction by mid-year in the US

“The American transition to clean energy is unstoppable, and Enel Green Power North America is playing a leading role,” said Salvatore Bernabei, CEO of Enel Green Power and Head of Enel’s Global Power Generation business line. “With more than 2 GW now under construction in the United States, more than ever before, we are creating value with communities, partners, and our entire value chain, helping meet the ambitious clean energy targets of policymakers and businesses alike.”

Enel is expanding its presence in Texas, to bring added capacity and resiliency to the local grid. The company has now started construction of the Roseland solar + storage, Blue Jay solar + storage and Ranchland wind + storage projects. At 639.6 MW , Roseland will be Enel’s largest solar plant in the US and Canada and will be paired with a 59 MW battery storage system. Located in Falls County, Roseland is expected to achieve commercial operation in the second-half of 2022.

In Grimes County, Texas, the Blue Jay solar + storage project will pair a 270 MW solar photovoltaic (PV) plant with a 59 MW battery storage system. The project is expected to begin operations by the end of 2021. The Ranchland wind + storage project will be a 263 MW wind farm paired with an 87 MW battery system. Located in Callahan and Eastland counties, operations of the project are expected to begin in the first quarter of 2022.

Enel previously announced construction, which is currently underway, on three other renewables + storage hybrids in Texas including the Lily solar + storage, Azure Sky solar + storage and Azure Sky wind + storage projects. Additionally, the company plans to retrofit its 500 MW High Lonesome wind farm and 497 MW Roadrunner solar farm in West Texas with a 57 MW battery storage system at each plant, with construction expected to begin this summer. In total, Enel Green Power has six projects under construction in Texas representing 2 GW of new generating capacity and around 600 MW of battery storage.

Projects in Illinois and Oklahoma

Enel is growing its portfolio in Illinois with the construction of the Alta Farms wind project in DeWitt County. The 200 MW plant is expected to begin operations in the second-half of 2022. In Oklahoma, Enel has started construction on the 140 MW Rockhaven wind project in Garvin and Carter counties, adjacent to the Origin wind farm which the company has operated since 2015. The project is expected to achieve commercial operation by the end of 2021.

Enel Green Power continues to be the partner of choice for companies and utilities looking to purchase renewable energy and all five projects being announced today have offtake agreements for a portion of their output.

Enel Green Power North America is a leading developer, long-term owner and operator of renewable energy plants in North America, with a presence in 15 US states and one Canadian province. The company operates 60 plants with a managed capacity of over 6.7 GW powered by renewable wind, geothermal and solar energy.