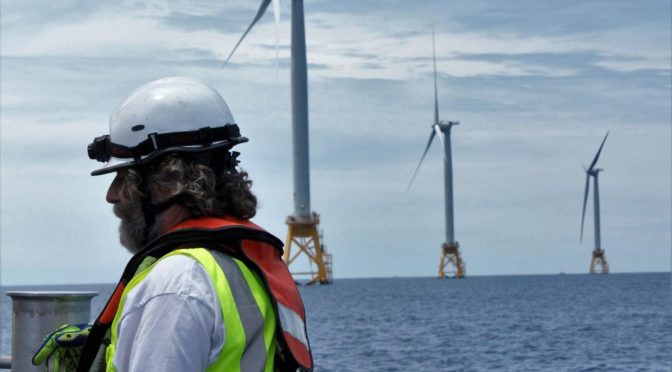 For highlights of historical wind energy R&D accomplishments over the past several decades, see https://www.energy.gov/eere/wind/downloads/wind-energy-technologies-office-lasting-impressions.

The WETO-supported offshore wind demonstration project proposed for deployment off the coast of Maine achieved a major milestone when the state’s Public Utilities Commission approved and Maine Aqua Ventus I and Central Maine Power Company signed the project’s 20-year Power Purchase Agreement (PPA). Securing a power offtake agreement allows the demonstration project to sell its electricity to the Central Maine Power utility, and helped the project attract financial investors. On August 5, 2020, Diamond Offshore Wind and RWE Renewables joined New England Aqua Ventus to lead the development, construction, and operation of the project. Diamond Offshore Wind is a subsidiary of the Mitsubishi Corporation, and RWE Renewables is the 2nd-largest owner of offshore wind plants in the world. Both companies bring global expertise in offshore wind project development and construction and are supporting the demonstration of the project’s floating concrete foundation.

In September 2020, WETO leveraged funding from the Bureau of Ocean Energy Management (BOEM) to deploy two offshore wind research buoys off the coast of California in water that is 2,000–3,000 feet deep. This marks the first time the buoys are gathering meteorological and oceanographic measurements off the West Coast. The buoys will collect data for a year to support BOEM decisions on potential leasing of wind energy sites off California’s coastline and bring a new renewable energy source to the state. The deployment follows a $1.3-million upgrade to install more powerful lidars as well as making the associated data management system open source to foster easier access by the wind scientific community at large.

The National Offshore Wind R&D Consortium was established by DOE and the New York State Energy Research and Development Authority with investments of $20.5 million each to fund high-impact research projects that lower the costs of U.S. offshore wind and support supply chain development. State agencies in Maryland, Virginia, and Massachusetts have since contributed funding to the Consortium, resulting in a total investment of around $46 million. The Consortium’s first RFP resulted in 20 awards totaling $17.3 million, and in 2020 it announced its second Request for Proposals (RFP) for industry-prioritized offshore wind R&D topics.

With funding from WETO, DOE’s Sandia National Laboratories (SNL) developed a wind turbine blade design that would allow turbines to be installed closer to one another, due to a faster dissipating, and less interfering, wake. The idea originated during the National Rotor Testbed project, which sought to design new wind turbine blades with a focus on wake research at the DOE/SNL Scaled Wind Farm Technology facility in Texas. The patented innovation changes how much the air slows down as it passes through the wind turbine rotor. The result of this blade design is a wake that disappears more quickly, which allows wind turbines to be spaced closer together without sacrificing efficiency — lowering costs by increasing energy production per unit of land area used and decreasing the amount of electrical lines and roads needed to connect them.

With funding from WETO, NREL released a new version of its FLOw Redirection and Induction in Steady State (FLORIS) model for wind plant performance optimization. FLORIS, which was co-developed by NREL and the Delft University of Technology, is an open-source platform available for download and collaborative development. The latest update leverages new modeling tools to enhance FLORIS’s ability to accurately design and analyze wind plant control strategies for larger arrays of turbines. Since 2018, more than 2,000 users have accessed the tool to inform turbine operation as well as wind plant design. By optimizing flow control strategies like wake steering, FLORIS enables existing wind energy facilities to improve productivity and increase profits. For more information on the new model, see the FLORIS 1.1.14 documentation or read the new discussion paper in Wind Energy Science.

NREL, with funding from WETO, works with dozens of small businesses across the United States to advance wind technology as a distributed energy resource through the Competitiveness Improvement Project (CIP). Launched in 2013, the CIP supports manufacturers of distributed wind technology — typically small and medium scale wind turbines — through competitively-awarded, cost-shared projects aiming to: 1) optimize designs for increased energy production and grid support; 2) test turbines and components to national standards to verify performance and safety; and 3) develop advanced manufacturing processes to reduce hardware costs. Between 2013 and 2020, NREL awarded 36 subcontracts to 20 companies, totaling $7.75 million of funding, while leveraging $3.79 million in additional private-sector investment. In August 2020, DOE selected eight projects to receive $2.6 million in DOE funding, bringing the total DOE commitment to over $10 million, and leveraging over $5 million in industry cost-share.

The WETO-funded Defense Deployable Disaster Wind Turbine project evaluates the technical and market potential for rapidly deployable wind energy systems to meet the energy needs of defense and disaster response activities. A 2020 report found there is a significant opportunity for wind turbines to provide on-site power and overcome the risks and limitations of existing diesel-powered generators used to support foreign defense missions or humanitarian activities, such as disaster response. The report’s analysis suggests that low wind speed optimized and rapidly deployable wind turbines, when integrated with battery storage, could be used to offset 80% of diesel generator use at certain forward operating bases.

The Microgrids, Infrastructure Resilience, and Advanced Controls Launchpad (MIRACL) project is part of WETO’s portfolio of investments aimed at enabling wind technology to be an affordable, accessible, and compatible distributed energy resource (DER). DERs are increasingly used by individuals, businesses, and communities to cost-effectively build resilient electric infrastructure and enhance the capabilities of local distribution grid operations. In 2020, this collaborative research project — which includes DOE’s National Renewable Energy Laboratory, Pacific Northwest National Laboratory (PNNL), Sandia National Laboratories, and Idaho National Laboratory — established a high-speed data link called the MIRACL Hub to leverage nearly a billion dollars’ worth of research capabilities and DER infrastructure across the four laboratories. This enables research, development, and industry validation of DER design and planning tools, components, and hybrid energy systems across multiple scales and configurations in geographically diverse operating conditions. A 2020 PNNL report found that many user-facing distribution modeling and simulation tools do not accurately calculate the performance or reflect the temporal, locational, and resilience value of distributed wind — identifying a future area of work for MIRACL R&D.

As energy providers explore new ways to reliably integrate renewable energy sources into the electric grid, they can now look to wind plants to supply more than just power. With support from WETO, research collaborators from NREL, Avangrid Renewables, the California Independent System Operator, and General Electric conducted a series of tests showing that wind technologies have the necessary capabilities to provide a full suite of grid services and respond to the dynamic needs of the electric grid. The findings from these tests—performed in an active grid-operating environment over several days — were promising. They will inform future research that explores how active power control capabilities for inverter-connected plants that combine wind, photovoltaic solar, and energy storage technologies could further accelerate the movement toward the electric grid of the future.

Through the Interconnections Seam Study, NREL joined national lab, university, and industry partners to examine the value of increasing transfers of electricity across the U.S. electric grid using high-voltage direct-current transmission. The study, sponsored by EERE and the DOE Office of Electricity, quantifies the costs and benefits of strengthening the connections (or seams) between the Eastern and Western Interconnections, which could create a more integrated power system and increase efficient development and use of the nation’s abundant energy resources, including solar, wind, and natural gas.

More than 50,000 wind turbines with a combined capacity of over 100 gigawatts operate in the United States, creating a serious need to protect wind infrastructure from cyberattacks. With support from its national laboratories, WETO published the Roadmap for Wind Cybersecurity, which outlines the increasing challenges of cyber threats to the wind industry, its technologies and control systems, and present activities and best practices that the wind industry can use the improve cybersecurity.

DOE’s Idaho National Laboratory (INL) licensed its General Line Ampacity State Solver (GLASS) software to WindSim Americas. GLASS is a crucial piece of INL’s weather-based Dynamic Line Rating (DLR) methodology, which is a tool that provides industry with a means for optimizing use of existing transmission capacity and reduce transmission congestion. GLASS uses real-time weather data and forecasts to dynamically rate overhead transmission lines, optimizing the use of electricity infrastructure for the integration of wind energy.

Daytime photo of a wind farm with a man standing in the foreground and a hawk perched on this hand. Sam Dollar and Houdini test bird flightpaths around wind turbines at Flatirons Campus. Photo by Jason Roadman, NREL

A WETO-supported bat deterrent system developed by NRG Systems, Inc. of Vermont has been successfully commercialized. NRG announced in July 2020 that Siemens Gamesa Renewable Energy (SGRE) was providing installation support of the bat deterrent system, which uses nacelle-mounted ultrasound-generating devices and a controller integrated with the turbine’s SCADA system to deter bats from wind turbines. SGRE has installed the system on its wind turbines in Ontario, Canada, and Maui, Hawaii.

Commissioned by WETO, DOE’s Pacific Northwest National Laboratory developed ThermalTracker-3D, a stereo-vision solution for evaluating flight tracks and other data on birds and bats around offshore wind turbines. The technology uses thermal video that records movement day or night, even in limited visibility conditions. ThermalTracker-3D continuously transmits satellite data showing if and when birds and bats are active near proposed wind farms, without the need for researchers to travel to the deployment site.

WETO and Berkeley Lab, in partnership with the U.S. Geological Survey, made significant improvements to the U.S. Wind Turbine Database, which contains data from more than 65,000 wind turbines spanning 43 states plus Puerto Rico and Guam. Since its launch in 2018, the dataset has been viewed more than 4.5 million times, and continues to serve as the authoritative data source on wind energy deployment for agencies evaluating the impacts of wind development, including its impact on radar missions. In 2020, as an extension of the Database, a dataset of as-of-yet unbuilt turbines, which are in various stages of development, was prepared for use in radar impact assessments and to estimate possible cumulative impacts of wind project buildout in the United States.

In 2020, Purdue University and the University of Minnesota each concluded WETO-funded research focused on exploring eagle physiology to improve the effectiveness of deterrents used around wind energy facilities. Purdue evaluated eagle hearing and vision ranges, while the University of Minnesota assessed eagle hearing. Purdue found that eagles have a blind spot near the tops of their heads that hinders their ability to see ahead, when looking down and hunting. This finding suggests the need for a deterrent that is sufficiently alarming to an eagle to cause it to look up when hunting. Purdue also found that blue/indigo and orange/red would be most visible to eagles against various backgrounds. The study concluded that golden eagles are more likely to respond to visual signals, whereas bald eagles are more likely to respond to a combination of sight and sound. The University of Minnesota explored hearing range and response to various auditory stimuli, including eagle vocalizations, finding that eagle deterrent developers should consider varying frequency and volume patterns to achieve the strongest and least-habituated responses.