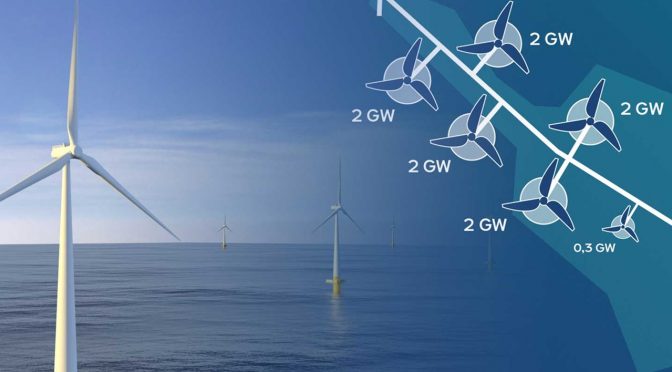 „Offshore wind can provide electricity reliably and inexpensively and is therefore perfect for producing green hydrogen on an industrial scale. However, the production of hydrogen at sea requires substantial start-up investments in pilot projects. Making a clear statement on offshore production and transforming the hydrogen strategy into legislation will enable German policy-makers to speed up the development of this technology and tap into its potential for climate protection“

It is the project that has been keenly awaited by many, not just the 200 attendees of the digital event. The Parliamentary Evening “Green hydrogen from the North Sea” on 8 December was centred around achieving a successful energy transition. The newly established association AquaVentus presented an unrivalled project to install ten GW offshore wind turbines in the North Sea between Heligoland and the Dogger Bank sandbank by 2035. The wind power will be used to produce hydrogen, which will then be transported to land via a pipeline.

Ten gigawatts by 2035 – AquaVentus, the central pillar of the hydrogen strategy

The EU and Germany are committed to the goal of reaching climate neutrality by 2050. The production of green hydrogen from renewables at sea can make a significant contribution to this endeavour and play a key role in the decarbonisation of Germany as an industrialised country. Green hydrogen opens up a huge amount of potential for the energy industry, turbine construction and the CO2-free design of energy-intensive sectors, as well as the transformation of the mobility and logistics sector. “Producing up to one million tonnes of green hydrogen per year might sound utopian. But we are confident that this will become a reality and soon be normal. I am delighted that the Island of Heligoland can make a substantial contribution to reaching Germany’s climate targets and will become a key element of the national hydrogen strategy of the Federal Government,” says Jörg Singer.

The Federal Commissioner for Hydrogen, Dr Stefan Kaufmann, regards AquaVentus as a true flagship project. “The North Sea region is set to play a pivotal role in the future hydrogen economy. The AquaVentus initiative brings together strong partners and connects the value chain from production to transportation to customers. The project can demonstrate how innovative technologies work together in practice,” says Kaufmann.

RWE contributes its broad expertise in renewable energies and hydrogen to the AquaVentus initiative. The company is the second largest operator of offshore wind farms worldwide. Off the island of Helgoland, RWE operates two offshore wind farms: Nordsee Ost (295 MW) and Amrumbank West (302 MW). Another offshore project, Kaskasi (342 MW), will be added next year. This makes RWE the largest offshore player on the island.

Furthermore RWE is positioned along the entire value chain for green hydrogen: RWE Renewables can supply clean electricity for hydrogen production. RWE Generation has the know-how to produce green hydrogen. RWE Gas Storage can store hydrogen in its gas storage facilities, and the energy trading company RWE Supply & Trading can supply the fuel to industrial customers in line with their needs. RWE is already driving forward some 30 projects in the Netherlands, Germany and the UK.