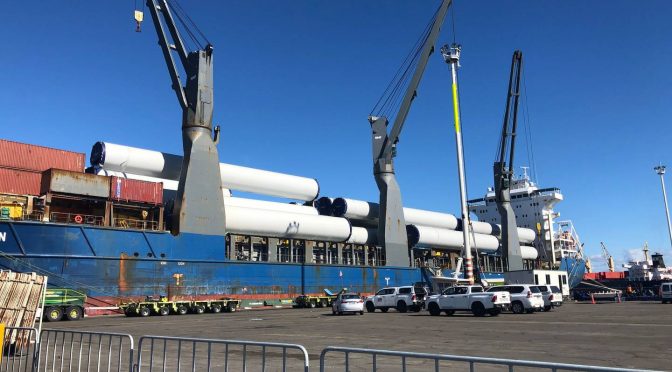 The parts arrived at Napier Port this week and will be stored in Hastings and Palmerston North before being delivered from storage yards progressively to the Turitea wind farm in the Tararua Ranges.

The wind farm is being built for Mercury by the supplier, Vestas.

Following the most recent shipment, almost all the turbine components for the full wind farm build are in New Zealand, according to Mercury.

A Mercury spokeswoman confirmed the turbines that arrived on Monday are eventually destined for the Turitea wind farm.

“Each Vestas V112 turbine measures 125m from base to rotor tip,” she said. “Two sections of similar height go together to form the base tower, supporting a nacelle that contains the drive train and a hub at 69m above ground to carry the blades.

“Once the 60 turbines are all installed, the Turitea Wind Farm will be New Zealand’s largest wind farm by generation output, with a total capacity of 222MW.”

“This kind of project cargo is business as usual for Napier Port, albeit with a few special requirements,” she said. “There have been previous deliveries of turbines and there will be more.

“The ship bringing in the turbines is usually docked for around a week, while they are unloaded direct to a heavy haulage transporter.”

The Mercury spokeswoman said Vestas is bringing the remaining components for the turbines through Napier Port, apart from the blades which have come through the Port of Taranaki.

A number of local residents also took to social media after spotting the large turbines on the move across the region by road.