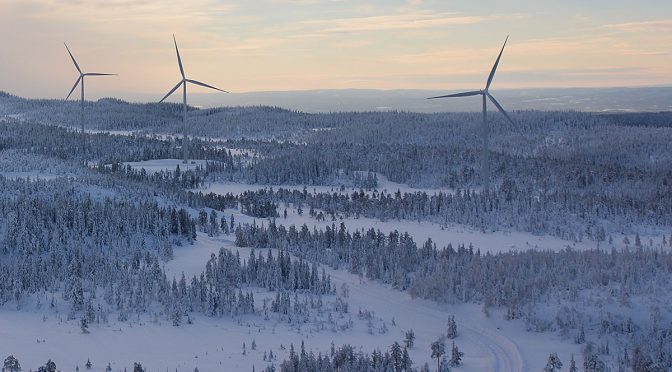 The Björnberget wind power project, which Enlight is buying, is one of the largest wind energy projects in Europe located in central Sweden, and has a total capacity of 372 megawatts.

Enlight Renewable Energy announced it has completed the transaction to acquire control in a huge wind power generation project in Sweden. Enlight will invest €435 – 445 million in building the project, which has a total capacity of 372 megawatts, and has obtained the main required permits for its construction, which will begin immediately.

The Björnberget project, which Enlight is buying, is one of the largest wind farm in Europe located in central Sweden, with 60 planned wind turbines based on Siemens Gamesa new 5.X technology.

The company’s share in the project will be 55%-61%, and the rest will be held by the European infrastructure fund PGEIF – Prime Green Energy Investment Fund, which specializes in investments in wind energy in the Nordic market. PGEIF is part of the “Prime Capital” group, which manages billions of euros worth assets and investments around the world. Beyond the current transaction, Enlight and the fund agreed to operate as strategic development partners to promote additional renewable energy projects in the Nordic region.

The Björnberget project was developed by RES, one of the largest renewable energy companies in the world. which will also provide the civil construction works and asset management services for the project.

As part of the transaction, Enlight will be allocated a share of about 20% in the PGEIF fund and will invest up to €50 million in the fund, which will be used for investments in additional RE projects in Nordic countries. The company’s weighted share in the project may decrease to 55% in case new investors will join the fund.

The project company is in negotiations with one of the global technology giants to sell about 50%-55% of the facility’s electricity production for the first 10 years as part of a power purchase agreement (PPA). The project’s electricity sales are expected to total around €30 million in the first year, and around €60 million per year on average for the operating period. The EBITDA is estimated at around € 50 million on average per year for the operating period.

Enlight cofounder and CEO Gilad Yavetz said, “Especially during these challenging days for the Israeli economy, we are very proud to complete this important deal. We would like to thank our partners – Prime Green Energy Fund, RES, who developed the project and will perform its construction works, and Siemens Gamesa who will provide state-of-the-art turbines for the project, for showing their utmost commitment and worked with great intensity until the transaction was completed. The new project, which will begin construction immediately, will significantly increase Enlight’s portfolio and its revenues. This is Enlight’s second large-scale project in the Nordic market, the biggest, most developed and liquid energy market in Europe. This transaction is part of the company’s expansion strategy in the Nordic market and will increase Enlight’s flexibility and competitive advantages in many aspects”.