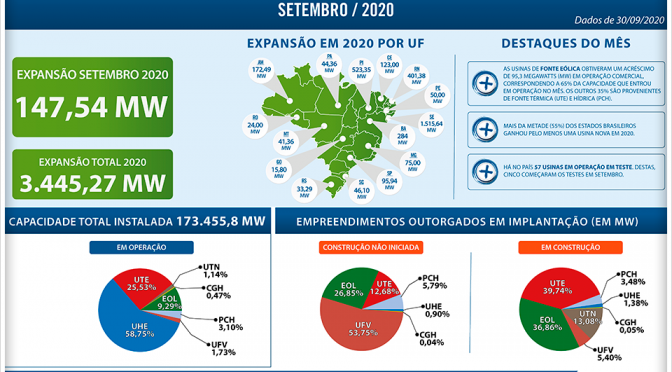 The National Electric Energy Agency (ANEEL) closed September with 147.54 megawatts (MW) released for commercial operation – 65% from wind generation and the other 35% from thermal sources (thermoelectric) and small hydroelectric plants.

In 2020, the Agency’s inspection released 3,445.27 MW in 15 states of the country, that is, more than half of the federal units in Brazil won at least one plant this year.

Despite the Covid-19 pandemic scenario, ANEEL has typically kept up with the expansion of electricity supply in Brazil. Among the innovations used by the Agency’s inspection is, for example, the use of technologies that allow the monitoring of works by means of satellite images.

In August, Brazil reached an installed capacity of 173,455.8 MW of inspected power, according to data from ANEEL’s Generation Information System, SIGA, updated daily with data from plants in operation and projects granted in the construction phase. building. Of this total in operation, 74.47% of the plants are powered by sources considered sustainable, with low greenhouse gas emissions.