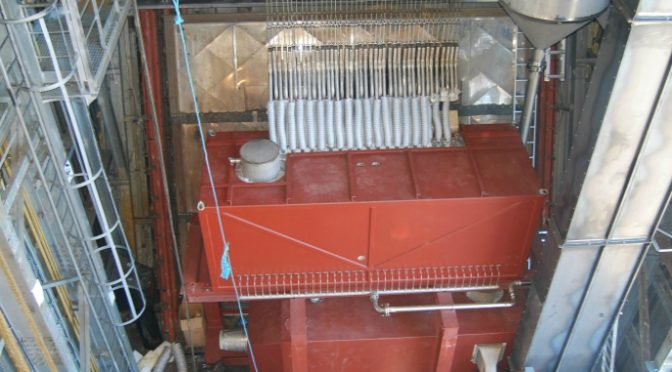 Current state of the art concentrated solar power (CSP) plants use central receivers with several options for heat transfer fluids (HTFs) and storage mediums. Usually, these materials and processes are considered separately, each with their specific restraints. Occasionally, molten salts have been used as both the HTF and the thermal energy storage medium. The chemical stability of the salts puts an upper limit on the working temperature of 565 °C, limiting the efficiency of heat-to-electricity conversion to about 42 %. The EU-funded NEXT-CSP project is using fluidised refractory particles (resistant to heat decomposition) as both the HTF and storage medium. They boost the operating temperature up to 750 °C and should significantly increase Concentrating Solar Power plant efficiency.

Towering above the rest

NEXT-CSP chose olivine (the source of peridot), a natural silicate of magnesium and one of the most common minerals on Earth, to make the particles for the HTF. Making good use of the particles required significant innovation on the technical side as well, including developing suitable solar thermal receiver technology and a new heat exchanger composed of 1 300 tubes in which the compressed air from the gas turbine compressor flows, and an advanced combined cycle. The technology is integrated in a tower Concentrated Solar Power system consisting of the solar receiver, the hot store, the heat exchanger, the gas turbine and the cold store. Project coordinator Gilles Flamant of the French National Centre for Scientific Research (CNRS), explains: “High atop the tower, the HTF in the cold store is heated by sunlight reflected onto the newly designed multi-tube receiver. It goes to the hot tank where it can be stored until you want to use it. At that point, it goes through the heat exchanger where heat is transferred from the particles to the compressed air to power the turbine.” Overcoming challenges related to space and weight limitations at the top of the tower, all the components were installed and validated at the top of the THEMIS 5-MW solar power tower in France.

For the commercial-scale power plant (150MW), scientists have adopted a multi-tower concept aiming to boost the overall cycle efficiency of typical solar power plants from 42 % to 48.8 %. It can be operated as a solar ‘peaker’ plant as well, storing the heat absorbed during the day to be delivered during the evening hours of peak electricity demand when the electricity cost is also the highest. Flamant concludes: “Under these conditions, we expect the nominal plant efficiency of the fluidised-particle solar power plant to be about 20 % greater than current state-of-the-art molten salt towers. The design should also decrease electricity costs by about 25 % and significantly reduce the cost of the storage medium. We have successfully demonstrated that solid particles can be an important and cost-effective alternative to liquids for collection and storage of solar energy in solar thermal power plants.” NEXT-CSP’s innovative technology has been awarded a global patent. Commercialisation should begin within the decade, bringing clean and secure solar electricity to consumers, greener thermal energy storage for the environment than electrochemical batteries, and a competitive edge to the concentrated solar power industry.