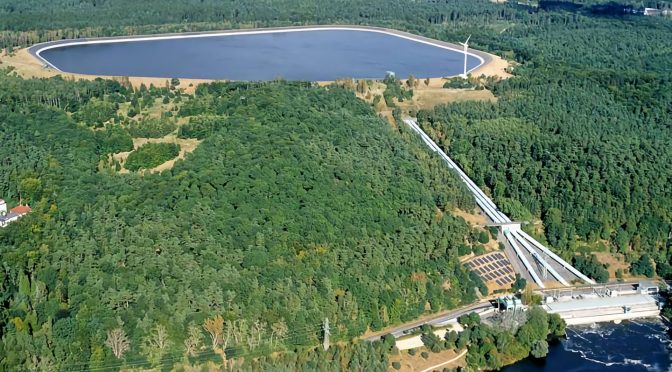 In expanding its energy production via solar energy in Germany, Vattenfall is set to begin construction of a photovoltaic plant at the Markersbach pumped storage plant in Saxony, close to the Czech border. Around eleven thousand solar modules will be installed at the power plant, in total around 4.6 MW. This corresponds to the annual consumption of 1500 German households.

Similar, at the pumped hydro power station in Geesthacht, close to Hamburg, another 2.4 MW will be added to the 2 MW solar power facility previously installed.

The dam projects in Markersbach and Geesthacht were awarded a contract by the German Federal Network Agency as part of a previous PV tendering round.

“The locations of our pumped storage facilities offer favourable conditions for the construction of photovoltaic systems. Meanwhile, the use of existing technical infrastructure leads to synergies that also benefit the profitability of solar power”, says Claus Wattendrup, Head of Business Unit Solar & Batteries.

Peter Apel, CEO of Vattenfall Wasserkraft adds, “Vattenfall’s goal is to enable fossil-fuel-free living within one generation. That’s why it makes sense for us as a company to continue to expand our renewable energies in those regions where we have been an integral part of the local energy infrastructure for decades with our proven pump storage technology.”

Concern for the environment

Vattenfall attaches great importance to environmental compatibility in its planning of photovoltaic plants. For example, the modules in Markersbach are arranged on the dam so they are as concealed as possible from surrounding vantage points in the region.

Vattenfall’s PV@hydro project is an example of how existing and new energy sectors can be meaningfully linked. Vattenfall is currently supplementing existing facilities with photovoltaics (PV), particularly in Germany and the Netherlands, where solar is combined with wind farms.

Vattenfall operates a total of twelve hydro power plants in Germany with an installed capacity of approximately 3,000 megawatts (MW), primarily pumped storage plants and smaller run-of-river power plants. Vattenfall has a market share of approximately 40 percent of Germany’s total pump storage capacity of roughly 7,000 MW. The two largest German pumped storage plants  – Markersbach in the Ore mountains with 1,050 MW and Goldisthal in Thuringia with 1,060 MW – are owned by Vattenfall.