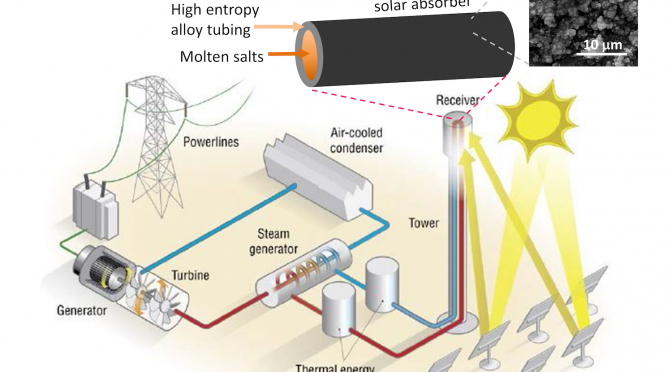 Engineers at Dartmouth have received a three-year $750,000 grant from the U.S. Department of Energy (DOE) to develop a new high-temperature tubing material for a concentrated solar power (CSP) system using a patented alloy developed at Dartmouth that could both increase efficiency and decrease the cost of harnessing and storing solar energy.

The researchers will be investigating the newly-discovered potential for this high entropy alloy (HEA)—formed by combining five or more elements—to act as a high-efficiency solar thermal absorber when oxidized.

This application for the alloy was discovered entirely by accident when, in 2017, Dartmouth engineering professor Jifeng Liu, Principal Investigator on the grant, was speaking with students about their work with Ian Baker, Dartmouth’s Sherman Fairchild Professor of Engineering and an HEA expert. Liu realized their work on the HEA, which was developed by Baker and a former PhD student, could be applicable to his own research on solar absorbers by oxidizing the surface of the alloys. Since then, Dartmouth engineering students have carried the research forward through PhD and honors theses.

“These FeMnNiAlCr HEAs are stronger and more ductile than stainless steel, have both better oxidation and corrosion resistance, and can be easily formed,” said Baker, Liu’s co-PI on the grant. “It is very exciting to be working with my Dartmouth colleagues on their further development.”

Liu, an expert on optoelectronic materials, notes that the oxidized HEA is less expensive than commonly-used nickel-based high-temperature alloys, and has excellent solar absorption and storage capacity for the heat derived from solar energy.

“Right now, CSP systems have already achieved 10-hour storage,” said Liu, who is working toward even longer storage periods. “So, you can harness your solar energy during the day and use it at night. That’s the beauty of it.”

Also assisting with the research will be co-PI Geoffroy Hautier, who will join Dartmouth later this year as The Hodgson Family Professor of Engineering, as well as two Dartmouth students and two national lab partners: Ames Laboratory and Oak Ridge National Laboratory. Hautier, who specializes in computational materials science, will computationally map the material to predict outcomes and guide the research without relying solely on costly and time-intensive lab experiments.

The grant was recently announced by the federal Established Program to Stimulate Competitive Research (EPSCoR), which encourages university researchers from EPSCoR states to partner with researchers at DOE National Laboratories on topics of common interest.

“Both EPSCoR states and the National Laboratories benefit strongly from these productive, innovative research partnerships,” said Under Secretary for Science Paul Dabbar in a press release announcing $21 million in funding for 31 EPSCoR research projects, including Dartmouth’s. Projects were chosen by competitive peer review under a DOE Funding Opportunity Announcement for EPSCoR State-National Laboratory Partnerships.