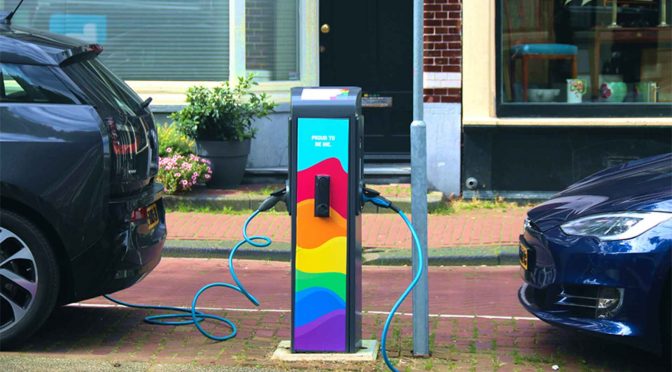 During the Dutch Pride Week, proceeds from Amsterdam’s public chargers will be donated to the Dutch LGBTQ association COC, to help support youth initiatives.

For many of Amsterdam’s EV driving residents, it has become somewhat of a tradition: seeing the public chargers that they use to charge their EVs colorfully dressed up during the Dutch Pride festivities. On Thursday morning, they woke up to see that many of the city center’s chargers had, yet again, received a rainbow makeover from a team of volunteers from Vattenfall and charging station manufacturer EVBox.

Throughout the Dutch Pride Week (July 25–August 2), all revenue generated from more than 100 specially-covered stations across the city will be donated to the Dutch LGBTQ association, COC.

Pride is more important than ever

Although Amsterdam’s main Pride event is canceled, several virtual Pride events are still planned to take place in the coming weeks so that the LGBTQ community and its allies can celebrate virtually.

“Considering the challenging times that we live in today, celebrating diversity and establishing dialogues between different groups of people is more important than ever. Therefore EVBox and Vattenfall are delighted to be able to raise money also this year for the COC’s important and inspiring youth initiatives,” says Ronald Stahli, chairman Diversity & Inclusion, Vattenfall Netherlands.

Earlier this summer, Vattenfall’s Diverse Energy Network and Rainbow Network in Germany received a lot of positive respons for its digital Pride week event that was arranged between 29 June and 3 July.