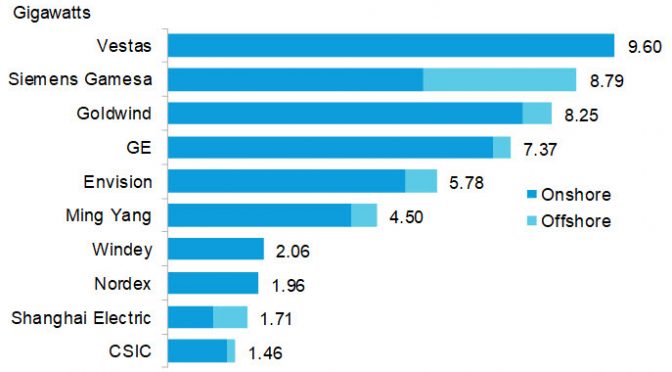 The commissioning of wind turbines for wind power increased by 21% to 61GW in 2019, with Danish manufacturer Vestas once again taking first place despite its market share being reduced and despite Vestas installing less capacity than the previous year.

The increase in the new operating capacity was driven by China and the US. UU., As developers rushed to build sites before subsidies expired, Bloomberg New Energy Finance (BNEF) explained in its 2019 global wind turbine market stock report.
The research and data firm expects another strong year for the two world markets, helping to drive an expected 24% increase to 75 GW of commissioned capacity worldwide in 2020: 69.4 GW on land, 6 GW on the high seas .

However, Oliver Metcalfe, lead author of the report and BNEF analyst, warned: “Post-2020 uncertainty could expose some larger players unless they diversify into new growing markets.”

Siemens Gamesa doubled its facilities on the high seas and tripled its capacity in the US. UU. In 2019, which helped him rise from fourth place to second place.

GE accounted for more than half of the new 9.3GW capacity put into service in its local market in 2019, which allowed it to overtake Vestas as the leading supplier in the US. UU. And finish fourth worldwide, behind Goldwind.

The newly commissioned capacity supplied by Enercon (1.37GW on land, below 2.5GW) and Senvion (520MW, on land, below 667MW) collapsed as Germany’s offshore wind market collapsed due to the shortage of sites available, litigation and extended terms.

Meanwhile, Suzlon (464 MW, all on land, below 933MW) suffered a similar destination in India, where insufficient network infrastructure and delays in land allocations and tenders made installation difficult.

New wind farms were launched in 43 countries last year, according to BNEF figures.

Total land additions were 13.3 GW in America, 9 GW in Europe, including Turkey and Russia, 500 MW in Africa and the Middle East, and 30.4 GW in Asia Pacific.

Offshore wind installations accounted for only 12% of the newly commissioned capacity last year, an increase of four percentage points compared to 2018.

Siemens Gamesa more than doubled its offshore facilities in 2019 (up to 3.3 GW), retaining the first place of suppliers on the high seas, ahead of MHI Vestas (1GW). He commissioned almost 2GW only in UK waters, including the 1.2 GW Hornsea One project on the east coast of England.

Tom Harries, head of wind research at BNEF, warned that offshore facilities will likely fall in 2020, before increasing and breaking the 10 GW barrier per year in 2023.

He added: “This growth perspective has led to intense competition among turbine manufacturers. At the moment, the advantage is that the manufacturer sells the most powerful turbine.

“Industrializing the production of a slightly smaller turbine through higher volumes could reduce costs and prices.

“The opportunities for turbine manufacturers to compensate for lower prices with long-term maintenance contracts are less clear than in offshore wind power.”