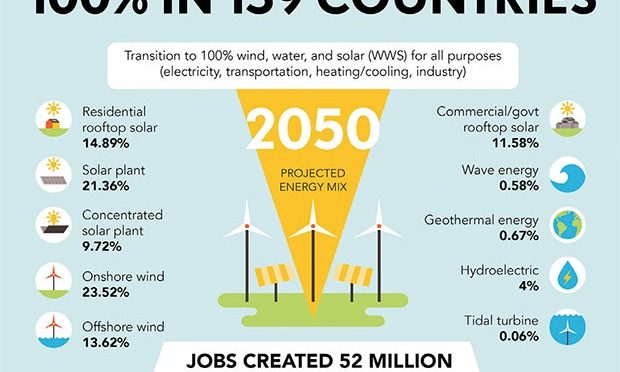 The message from the COP 25 conference in Spain is that the world must rapidly decarbonize or face an existential crisis. No fooling. We have to slash carbon emissions by 55% over the next 10 years or we are all dead ducks. That includes the billionaires who frolic in Davos as well as the migrants who congregate at national borders.

The problem is, everyone talks about climate change but few are doing anything significant about it. Most have absolutely no idea what to do or how to do it. But Mark Jacobson, professor of civil and environmental engineering and director of the Atmosphere/Energy Program at Stanford University, and his research colleagues say they have the answers, not just for the United States or China or Germany but for 143 countries around the world.

“There are a lot of countries that have committed to doing something to counteract the growing impacts of global warming, but they still don’t know exactly what to do,” says Jacobson. “How it would work? How it would keep the lights on? To be honest, many of the policymakers and advocates supporting and promoting the Green New Deal don’t have a good idea of the details of what the actual system looks like or what the impact of a transition is. It’s more an abstract concept. So, we’re trying to quantify it and to pin down what one possible system might look like. This work can help fill that void and give countries guidance.”

Is it gonna be costly? Oh, yeah. The team figures about $73 trillion will be needed to get it done worldwide. But that’s hardly the end of the financial discussion. They say the world can get to 80% renewable energy by 2030 and complete the transition by 2050. And doing so will pay some pretty hefty dividends — money that can be used to offset the cost. Global energy needs would be reduced by 57%. That in turn would reduce the amount of money the world spends on energy each year from $17.7 trillion to $6.6 trillion, a savings of $12.1 trillion a year. But it’s the social cost savings that are truly staggering — you know, things like death and disease caused by pollution from burning fossil fuels. The team pegs those costs at $76 trillion a year now but claims they will be reduced to $6.8 trillion annually by transitioning to 100% clean energy.

Add those two together and you get $80 trillion a year in benefits. Multiply that by the 10 years between now and 2030 and the transition to clean energy could save the world $800 trillion in avoidable costs. And, of course, all the energy generated by renewables won’t be given away. It will be sold at market prices, bringing in trillions more dollars.

But let’s say you’re a skeptic. Okay, cut those estimates in half. You still wind up with more than $400 trillion in savings over a decade on an investment of $76 trillion — more than a 500% return on your investment. What person wouldn’t jump at that deal?

Oh, you can’t put an accurate price on social costs, you say? Fine, ask yourself this question: How much would you pay to give your children, grandchildren, and great grandchildren a sustainable world where they can live long and productive lives free of cognitive impairment, emphysema, cardiovascular disease, and pulmonary issues? If you said “nothing,” stop reading immediately and go order yourself a MAGA hat.

Ready for more? Jacobs0n and company acknowledge there will be job losses as the result of the transition to 100% zero-emission energy, but their research suggests the transition will lead to the creation of 26.8 million more well paying jobs than the jobs that are lost. In other words, renewable energy will replace those existing jobs and add 26.8 million more worldwide.

The plan creates 3.1 million more U.S. jobs than the business-as-usual case, and saves 63,000 lives from air pollution per year.

In the US, the transition would require an upfront investment of $7.8 trillion. That money would pay for the construction of 288,000 new 5 megawatt wind turbines and 16,000 100 megawatt solar farms How much land would all those wind turbines and solar panels take up? Just 1.08% of the total land area of the US. But 85% of that land would be the spacing between wind turbines and could be used as farmland at the same time.

Jacobson’s work deliberately focuses only on wind, water, and solar power and excludes nuclear power, “clean coal,” and biofuels. Nuclear is excluded because it requires 10–19 years between planning and operation. It is also expensive and comes with the ever-present risk of a reactor meltdown, not to mention its role in weapons proliferation, mining, and the inherent risk of its waste products. “Clean coal” and biofuels are not included because they both cause heavy air pollution and still emit over 50 times more carbon per unit of energy than wind, water, or solar power.

This latest study also addresses the intermittent nature of renewable energy. The study finds adding energy storage can solve the intermittency problem. The researchers says electrifying all energy sectors actually creates more flexible demand for energy. For example, an electric car battery can be charged or an electric heat pump water heater can heat water any time of the day or night. Because electrification of all energy sectors creates more flexible demand, matching demand with supply and storage becomes easier in a clean, renewable energy world.

The full report, Impacts of Green New Deal Energy Plans on Grid Stability, Costs, Jobs, Health, and Climate in 143 Countries, One Earth (2019), is available online now at One Earth. It contains all the graphs and footnotes a detail-oriented person could hope for, but the most important point is the research tracks and fully supports the Green New Deal currently before the US Congress. It applies those same principals to 142 other nations which, in conjunction with the United States, consume more than 99% of all the energy used by humanity every year.