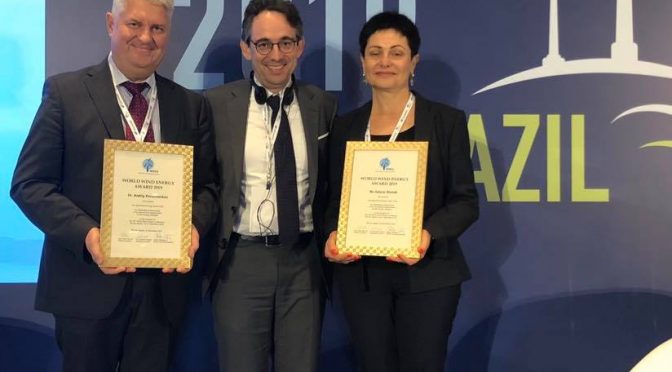 Andriy Konechenkov and Ms Galyna Shmidt have played a key role in initiating and implementing the renewable energy programmes of their home country, Ukraine. As a couple, they have been an excellent and complementary team which has contributed tremendously to wind power and renewable energy development in Ukraine, in many of the former Soviet Union countries and through their international networks also globally. Both have been driven in particular by the importance of renewable energy in overcoming dependence on hazardous technologies like nuclear power which has caused great damage to Ukraine and also on imported fossil fuels.

Ms Galyna Shmidt studied foreign languages and started her career as a journalist specialised on energy related topics, in her early years as editor of the magazine “Future Age Energy”. Becoming an expert of the different facets of renewable energy and its public perception, she focussed more and more on renewable energy and dedicated her professional life to furthering wind power in Ukraine. Thanks to her professional knowledge of foreign languages, she became also a key person in connecting Ukraine’s renewable energy community internationally.

After obtaining his degree in mechanical engineering, Andriy Konechenkov worked as a journalist, including as editor of the magazine “Echo of Chernobyl” during which he became one of the most knowledgeable experts of the Chernobyl nuclear accident and its impact on humans beings and the environment. As a consequence, he dealt more and more with renewable energy as the best alternative option for nuclear power, and, after having worked scientifically in the sector, he became an expert in renewable energy as well, in particular in wind power. His international exposure has made Andriy an expert widely recognised far beyond Ukraine.

Together and supported by many Ukrainian allies, Galyna and Andriy initiated and founded the Ukrainian Wind Energy Association – Andriy as its President, Galyna as Head of the International Department. Consequently, UWEA is today an important player in the Ukrainian energy sphere, connecting private sector, science and governmental bodies. UWEA became also one of the co-founders of the Global100RE Platform Ukraine, thus paving the way for a truly renewable energy future for their home country.

Thanks to Galyna’s and Andriy’s joint efforts, Ukraine is now prepared to leave behind the old energy sector and become a renewable energy leader which has the potential of bringing peace and prosperity to Ukraine and the whole region. Their record of application and achievement in a difficult part of the world qualifies them to jointly receive the World Wind Energy Award 2019.

Reive Barros do Santos and Elbia Gannoum have played an important role – in the public and in the private sector respectively – in making Brazil the leading wind energy country in South America, placing the country also globally on position eight.

Mr Reive Barros do Santos has been working in the electricity sector for more than 40 years, for some of the major utilities of Brazil as well as later for various government agencies and most recently as secretary of the ministry of mines and energy. He has been the leader in the Brazilian Government to support wind and solar energy. As president of the Brazilian Energy Company EPE, he has convinced the Brazilian congress of the viability of wind and solar projects in particular in the northeast region of Brazil. As director of the Brazilian Regulatory Agency ANEEL, he has conceived the rules for the advanced proposals of the distributed power. As professor for energy regulation, he has contributed to the education and training of many leaders in Brazil.

Ms Elbia Gannoum, after working several years for several government units, has become CEO of the Brazilian Wind Energy Association in 2011. As ABEEólica’s CEO, she has been active in strengthening the sustainable growth of wind energy, which now accounts for more than 9% of the Brazilian electricity matrix, with an 80% nationalized production chain and 15,4 GWs installed in more than 600 wind farms. Wind energy is today the second largest source of electric energy in Brazil.