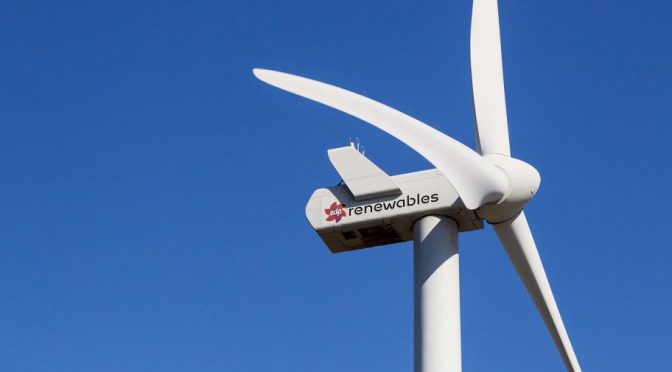 The company has acquired a 50% stake in a portfolio of three solar energy plants in the US with an installed capacity of 278 MW and has secured a contract to supply 804 MW of offshore wind energy via a JV, also in the United States; These additions to future installed capacity culminate a period that commenced with being awarded 490 MW in Colombia, EDPR’s 14th market; EDPR has now reached over 70% of its global capacity target of 7.0 GW, as envisaged in its business plan for the period 2019-2022;
EDP Renewables (EDPR), a global leader in the renewable energy sector and one of the world’s largest wind energy producers, has taken a huge leap forward in its future global installed capacity through the addition of 1,533 MW.

The company, through its fully owned subsidiary EDP Renewables North America LLC, announced last week the acquisition of a 50% stake in a 278 MW portfolio of three solar projects in the United States, and that it had secured a contract to develop 804 MW of offshore wind power, also in the United States, through a joint venture in which EDPR holds 50% of share capital.

The first portfolio, made up of three solar energy plants, was developed by First Solar Inc. It is expected to commence operations in the coming months and is secured by Power Purchase Agreements (PPA). The second announcement involves an agreement to supply 804 MW of clean and renewable offshore wind energy – enough to power approximately half a million homes – to customers in the state of Massachusetts.

These additions round off two successful weeks for EDPR that got underway on October 23, with the awarding of 490 MW in Colombia – officially marking EDPR’s entry into its 14th market – followed by being awarded a contract to build and transfer 302 MW in Indiana and the signing of another PPA, this time for 200 MW of solar energy, in California.

Following these five agreements in two weeks, EDPR has now secured over 70% of its global installed capacity target of 7.0 GW, as laid out in the company’s business plan for the period 2019-2022. Specifically, over the last ten days, the company has attained over 20% of its target.
Background branco

We are particularly excited about this announcement, not only because we have managed to close transactions with first-class companies in key markets, but also because it highlights our capabilities, and acknowledges and strengthens our position as one of the leading global operators of renewable energy. We are now more driven than ever to continue rolling out and delivering upon our business plan, as well as strengthening our ability to reach agreements. This last few weeks have also been testament to our work as drivers of renewable energy and as key players in the energy transition” said João Manso Neto, EDP Renewables CEO.

These milestones coincide with the deployment by Windplus of its first floating wind turbine. This marks a turning point in the sector which will drive this source of energy going forward. Windplus is a consortium led by EDPR (54.4%), as well as Engie (25%), Repsol (19.4%) and Principle Power Inc. (1.2%). Windfloat Atlantic, the name of this particular project, has successfully deployed and generated wind energy at depths of up to 100 metres, harnessing sources of energy in open water which were hitherto inaccessible.