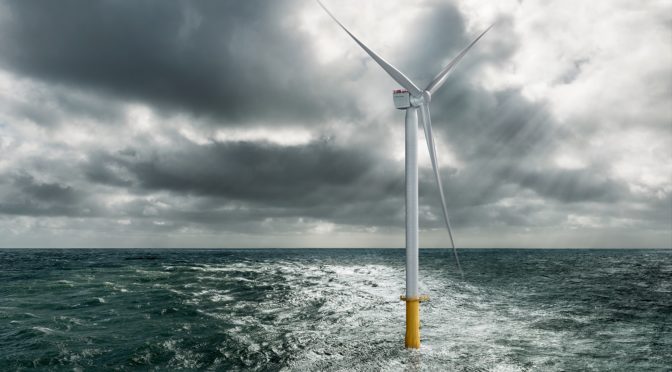 The Hywind Tampen floating marine wind farm, located in Norway, will be the largest in the world, with a total capacity of 88 MW and equipped with 11 wind turbines of the SG 8.0-167 DD model
This project, which will be the first to supply energy to oil rigs, will prevent the emission of more than 200,000 tons of CO2 annually
The close collaboration between Siemens Gamesa and the Norwegian company HYWIND SCOTLAND.jpg has made it possible to advance in the development of floating wind and thus expand the areas suitable for installing marine turbines

The largest floating marine wind farm in the world will be in Norway and will have 11 Siemens Gamesa SG 8.0-167 DD wind turbines. Hywind Tampen, whose commissioning is scheduled for the end of 2022, will also be the first floating marine park that supplies power to oil and gas platforms at sea.

“The close collaboration with Equinor has placed us at the forefront of this innovative technology, which allows us to unlock the vast potential of the offshore industry by being able to install the turbines in deeper waters,” said Andreas Nauen, CEO of the Offshore business of Siemens Gamesa, during the ceremony for signing this order.

The Hywind Tampen park, with a capacity of 88 MW, will be located about 140 kilometers from the coast – in waters between 260 and 300 meters deep – near the Snorre and Gullfaks oil and gas platforms, to which It will supply energy. Once in operation, this park will be able to meet 35% of the annual energy demand of both platforms, which will reduce the dependence on the use of gas turbines thus avoiding the emission of more than 200,000 tons of CO2 per year (equivalent to those emitted per 100,000 cars).

Floating foundations of the Hywind project will be stabilized by a ballast system and anchored to the seabed through mooring lines.

Siemens Gamesa and Equinor began their collaboration in 2009, with the development of the Hywind Demo project, the world’s first offshore floating turbine, installed in Norway. After the success of the initiative, the next step culminated in 2017 with the launch in Scotland of the first commercial offshore floating park with 30 MW, which is currently the largest in the world. Hywind Scotland has been a resounding success and has become the offshore park with the largest capacity factor in the United Kingdom. Now, with Hywind Tampen, the floating offshore wind segment takes a giant step.

The offshore industry already has a strong presence in Europe, with 18.5 GW installed and a strong potential of more than 100 GW by 2030. Floating wind could cover 10% of this market, supplying energy to some 12 million homes by 2030

Siemens Gamesa is the world leader in the wind sector, with a strong presence in all business segments: offshore, onshore and services. Through its advanced digital capabilities, the company offers one of the broadest product portfolios in the industry, as well as industry-leading service solutions, with which it contributes to generating more affordable and reliable clean energy. With more than 95 GW installed worldwide, Siemens Gamesa produces, installs and maintains onshore and offshore wind turbines, with an order book of 25.1 billion euros. The company is headquartered in Spain and is listed on the Spanish Stock Exchange (Ibex 35 index).