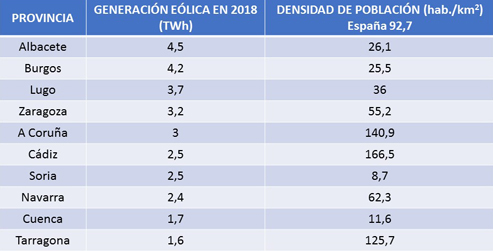 Albacete was in 2018 the Spanish province that produced the most electricity thanks to wind turbines, according to data from Red Eléctrica de España (REE). With almost 4.5 TWh generated with the 1,995 MW of wind power installed, Albacete revalidated the title of the most wind farm generating province in 2018 ahead of Burgos (4.2 TWh) and Lugo (3.7 TWh).

This is the ranking of the 10 provinces with the most wind generation in 2018:

The wind blows in favor of the most unpopulated provinces
As can be seen in the table, of the ten provinces with the highest wind generation in 2018, seven of them (Albacete, Burgos, Lugo, Zaragoza, Soria, Navarra and Cuenca) have a population density much lower than the Spanish average of 92 , 7 rooms / km2, and that the European Union (120), or that for example Germany (233). For these provinces, some of them from the so-called “Spain emptied”, the power generation activity in wind farms installed in its territory implies an important contribution to its economy.

For the Spanish society and Castilla la Mancha, the Albacete wind generation is very relevant since in 2018 it accounted for 1.8% of the total peninsular electricity generation, and 37% of the electricity demand of all Castilla La Mancha. In addition, it avoided the emission of 1 million tons of CO2 into the atmosphere (for a value equivalent to 15.9 million euros) equivalent to 2.5 tons of CO2 per inhabitant of the province, or planting an oak for each 2 inhabitants And also the import of fossil fuels worth more than 200 million euros.

Until September 2019, Albacete remains the first province in the wind generation ranking, but Burgos and Zaragoza are going to contest the podium until the end of the year, as they are installing new wind farms in several of these provinces.