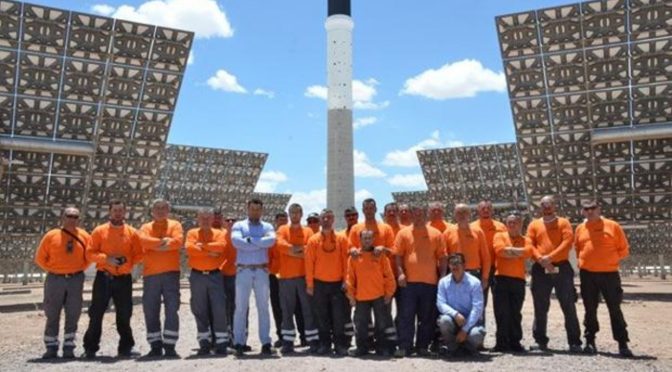 In the world, Córdoba now begins to sound due to other temperatures, those generated in the furnaces and solar shields manufactured by the company Refractaris, based in Montemayor, and which has become an international benchmark in the energy sector and solar thermal technology. In recent years, 95 percent of the existing solar shields in the world have been manufactured in the Cordoba factory, which has specialized in this sector to the point of consolidating itself as the most prestigious and demanded when undertaking this type of solar energy projects.

Refractaris team, after the installation of a sun shield – Refractaris

During 2018 and 2019, Refractaris has developed solar thermal energy projects in Dubai, Chile and China. The construction of this last concentrating solar power plant, whose solar shield was inaugurated on September 20, has marked a milestone in the history of this Cordoba firm. This is indicated by the general director of Refractaris, Antonio María Pino, who explains to ABC the «titanic» efforts to build this solar thermal power plant in Haixi, Qinghai province near Tibet, under the name LuNeng Haixi and by the Chinese company Sepco III.

With a capacity of 50 megawatts, the tower created in China reaches 190 meters high and has a storage capacity of 12 hours to supply the inhabitants of one of the Chinese regions with extreme weather, both in summer and winter.

The solar shield created in China was manufactured piece by piece at the Montemayor factory. “The usual thing to date has been that Chinese companies manufacture for the rest of the world, however, our technology has led us to reverse the balance and it is we who have used our technology. We have manufactured the shield at our facilities in Motemayor and transported it to China by rail, ”says the Refractaris executive. On the other hand, the project in the region near Tibet was done in record time, since the meteorological conditions of the place where the tower is located «left very short periods of time for the completion of the project on the planned date.