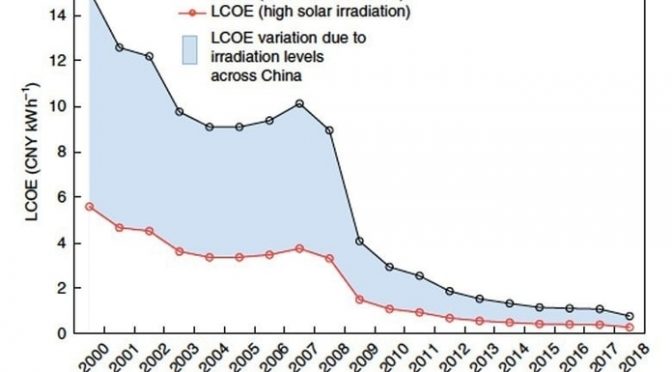 China is a leader in wind energy, concentrated solar thermal power and, above all, photovoltaic energy. Decades earlier than originally planned, China’s power grid has reached parity in the solar power market.

It means that solar energy is again cheaper than electricity in the Chinese electricity grid, an advance that can boost the prospects for industrial and commercial solar energy.

The projects analyzed in each city by researchers from the KTH Royal Institute of Technology in Stockholm concluded that the day they could be built without subsidies at prices even lower than those provided by the power grid, and approximately 22% could compete with the prices of the coal electricity throughout the country.

The grid’s point of parity, that is, the turning point at which solar generation costs the same as grid electricity, represents a key step in the expansion of renewable energy sources.

Other studies have indicated that certain countries of the European Union and the USA. UU. they would reach their solar energy parity by 2020, but in China they would have to wait decades!

This is a true miracle in China, since they have achieved this parity decades before, against the studies. However, these new studies, as one published in Nature Energy, conclude that the combination of technological advances, cost savings and government support have been essential to achieve the parity of solar energy with the current electricity grid.

The Chinese solar energy market expanded rapidly from a small rural program in the early 1990s to becoming the largest in the world.

Its installed capacity of photovoltaic solar panels during 2018 is more than a third of the world total, and the country represents half of the world’s solar expansions during that year.

Since 2000, the Chinese government has announced more than 100 policies to support the photovoltaic industry, and technological progress has helped make the solar energy market less expensive. As a result, the cost of solar energy electricity was reduced.

Jinyue Yan, a professor at the Swedish Royal Institute of Technology, said this dazzling performance was accelerated by government subsidies, but also because the Chinese government invested too much in redundant construction and excess capacity. Since the government intended to take the photovoltaic industry to a more sustainable and efficient level of investment, after having adjusted the incentive policies with the new Chinese policy 531.

The subsidy cuts under this policy in the course of 2018 were a sign that the government wanted the renewable energy industry to depend less on government support and, therefore, change its approach to quality.

These changes led to a crossroads on the part of the industry, especially when the generation of electricity from solar energy would reach parity with the network.

To try to achieve this, Yan and his team analyzed several solar, industrial and commercial projects without the support of the government and 344 Chinese cities. Therefore, they estimated the total life price of solar energy systems in these cities, taking into account gross costs and profits, already based on the amount invested in projects, electricity production and commercial prices.

They also established which facilities in each city could provide electricity cheaper than the grid, as well as a comparison of solar energy with the price of energy generated at coal-fired power plants.

They concluded that 22% of cities could have solar systems capable of producing electricity from solar energy at cheaper prices than coal-fired power plants.

The decrease in solar costs, especially crystalline silicon panels, means that the trend in China is also happening worldwide. The International Renewable Energy Agency had already said in May 2019 that by 2020 the grid parity could be the worldwide standard for the entire solar industry.

The conclusion that industrial and commercial solar energy is cheaper than grid energy means that the world market could adopt solar energy. Without subsidies and their distorted impacts driven by commercial benefits.