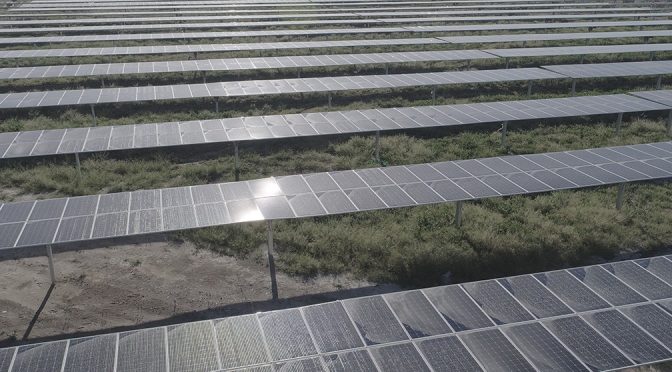 otana is ready to produce energy! In Spain, we have connected to the grid one of the seven solar power projects awarded in July 2017 to Enel Green Power following the Spanish government’s third renewable energy auction.

Enel Green Power has connected to the grid the new 85 MW Totana photovoltaic solar plant, in Murcia, which involved an overall investment of 59 million euros.

“The entry into service of this project represents a milestone for the company, not only because it is a plant built in record time, but due to the sustainable and innovative practices used to build it, that are highly pioneering in Spain. This is a further step in Endes’s commitment to the production of clean energy, one of the pillars of the national energy transition policy.”

EGP is working on the construction of some 900 MW of renewable projects with a total investment of more than 800 million euros in two different technologies. The company is currently building:

The construction of this renewable capacity responds to Enel Green Power’s strategy of decarbonizing its generation mix, a process whose first milestone is to reach 8.4 GW of renewable installed capacity by 2021, compared to the current 6.5 GW, with a total investment of around 2,000 million euros.

The photovoltaic power plant is made up of 248,000 modules and is expected to generate over 150 GWh per year, avoiding the annual emission of approximately 104,000 tonnes of CO2 into the atmosphere.

The construction of Totana was based on Enel Green Power’s “Sustainable Construction Site” model, incorporating the use of renewable energy thanks to a photovoltaic system that meets the power needs of the site, as well as implementing initiatives to involve the local population in the project’s construction. The PV panels used during the construction will be donated to the José Moyá Day Centre (for people suffering from mental distress), which EGP has also provided with efficient lighting. Other actions include recycling waste and composting the organic materials during the construction phase.

EGP applies a facilities development model that adds social value creation actions for the area where they are built, the so-called CSV model (Creating Shared Value). In particular, the CSV actions carried out at Totana solar project have fostered employment and improved employability of the population in Totana, prioritizing the hiring of local labor for the construction of the plant, as well as hiring locals for works related to the construction, catering and accommodation services for the staff, training courses in renewable energies for unemployed local residents and environmental awareness programs for schools, the José Moyá Day Centre and other local associations.