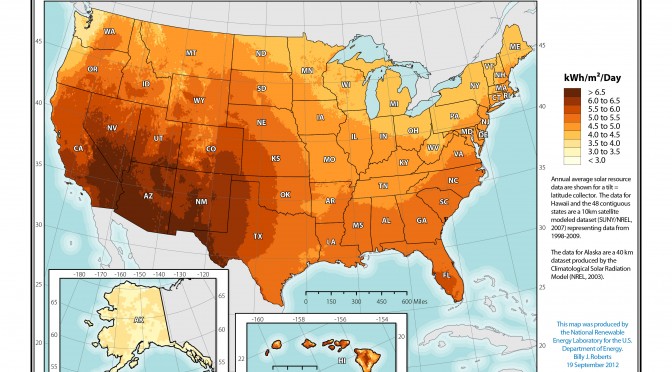 Though still a small contributor to the electricity supply, solar energy, PV and concentrated solar power, is revolutionizing how U.S. consumers generate and consume electricity.

Solar power offers enormous promise as a non-carbon-emitting energy resource. Yet in the U.S. today, less than 1% percent of our total energy supply – roughly 2.3% of our electricity – comes from the sun. Accelerating the shift to an economy substantially fueled by solar and other renewable energy resources will demand major policy changes at all levels of government. The technology, however, is largely at hand.

A bit of solar power history

Through most of the 20th century, efforts to tap solar energy focused on the sun’s thermal properties. Commercially introduced in California in 1909, water-heating solar collectors achieved greater status in the wake of the 1973 oil embargo, when President Jimmy Carter installed a much-heralded solar array on the White House, producing hot water for its laundry and cafeteria.

The technology for reliably converting sunlight to electricity emerged from Bell Labs in the 1950s, but the expense of manufacturing photovoltaic, or PV, cells confined them to high-value uses such as remote radio transmission and the space program. It was only with a dramatic drop in the price of silicon PV cells, from $76 per watt in 1977 to a fraction of a dollar in recent years, that PV has come into widespread use.

Most photovoltaic panels today use crystalline silicon as a semiconductor. These panels have multiple rows of cells, chemically treated to create positive and negative electric charges. When the sun strikes a cell, it creates a direct (DC) current that is then inverted to alternating (AC) current, the dominant form of electricity in the U.S. and many other countries.

About 5% of solar panels sold globally are “thin film” photovoltaics. Instead of constructing a module from multiple cells, thin-film PV manufacturers apply one or more semiconductor compounds just a few microns thick to the surface of a single substrate. Historically, thin-film photovoltaics have been cheaper to manufacture but less efficient than crystalline silicon at converting the sun’s energy to electricity, but today’s thin film technology is quickly catching up.

Multi-junction cells can capture a much greater share of the sun’s energy than conventional solar cells. Instead of relying on a single semiconductor such as silicon, multi-junction cells have several layers, each with a semiconductor compound that responds to a different part of the light spectrum. Though costly, this technology may come into broader commercial use in the coming years.

Rooftop solar is changing how U.S. consumers get electricity

According to the National Renewable Energy Laboratory, solar arrays on America’s rooftops could generate enough electric power to offset 39% of our present electricity needs. We have a long way to go to realize that potential, however. In 2018, rooftop arrays, solar parking canopies, and other “distributed” solar systems supplied approximately 30 billion kilowatt-hours of electricity – little more than 0.7% of total U.S. power generation.

Though still a minor contributor to our overall electric supply, distributed solar generation is bringing about a revolution in the way Americans produce and consume electricity. Utility companies and cooperatives have long been the dominant providers of electricity to U.S. consumers, relying primarily on central generating stations using fossil fuels, nuclear power, and large-scale hydro. Yet today, net-metering laws in many states require utilities to compensate customers for the surplus electricity they generate at their homes and businesses. This has led to fractious debates, with utilities arguing that they are being inadequately compensated for the distribution lines and backup power that they still provide to all customers.

Utilities may not be fans of distributed solar, but many of them are busy building their own solar installations. They are doing so, in part, to comply with renewable electricity standards that call for a minimum percentage of retail electricity sales in many states to come from renewable sources. According to the Berkeley Lab, these standards catalyzed roughly half of all U.S. renewable electricity capacity and generation from 2000 to 2017.

Federal policies have also given a boost to solar power. A 30% investment tax credit, in effect since 2006, has been instrumental in drawing investment capital to utility-scale solar projects. It has also made solar more affordable to homeowners and businesses – at least those with sufficient tax liability. The tax credit is slated to be phased out, however, scaling down to 10% for utility-scale and commercial projects in 2022, when residential solar will no longer receive a tax credit at all.

The tax credit’s phase-out may slow overall investment in solar, but utilities are expected to continue building large-scale PV projects. According to Lazard, the levelized cost of utility-scale PV is $36 to $46 per megawatt, making it competitive in many locations with combined cycle gas ($35-$81 per megawatt) and far cheaper than new nuclear power ($109-$191 per megawatt).

While PV is unquestionably the dominant solar power resource, the sun’s thermal properties have come into play at a few concentrating solar power facilities in the Southwest. Crescent Dunes, in the Nevadan desert, uses more than 10,000 heliostats – giant rotating mirrors – to capture the sun’s heat in molten salt, used for steam power generation. The stored heat allows electricity to be generated when it’s needed, not just when the sun is shining. This form of solar power, however, is three to four times as costly as photovoltaics, so its future prospects are limited.

The environmental impact of solar power

Solar power, like any energy resource, has environmental impacts. Utility-scale projects, in particular, can be challenging given the amount of land required for large-scale electricity production. To avoid encroaching on natural and wooded areas, converting unproductive farmland to solar is one common approach. Brownfields – abandoned mines, waste sites, and other industrial properties – offer promising solar sites too. And some developers are looking to reservoirs and sewage ponds as possible sites for floating solar arrays.

On pristine and non-pristine lands, wildlife protection is essential, both during and after construction of large solar plants. The desert tortoise, listed as threatened under the Endangered Species Act, has been a particular point of tension between project developers and nature conservationists in the Southwest.

Regulators in a few states are just beginning to reckon with how to provide end-of-life care to solar hardware – a problem that will become more acute as PV expands and current installations age. The European Union, way ahead in implementing a comprehensive recycling regime for solar panels, is setting the pace in this key area.

On the brighter side is the significant reduction in greenhouse gas emissions that solar energy’s widespread adoption can yield. Both solar PV and concentrating solar power have a much smaller life-cycle carbon footprint than conventional power generation.

Solar power, like wind, is variable. Just as sunny days may yield more electricity than consumers require, the absence of solar-generated electrons when the sun isn’t shining calls for other means of keeping pace with power needs.

Demand response is one such tool. When energy demand would otherwise outstrip the supply of clean power, customers can authorize their electric utility to pause or slow the operation of air conditioners, water heaters, swimming pool pumps, refrigerator defrosters, and other appliances. When there is adequate electricity on the grid, those same appliances can be programmed to run freely.

Broadening the grid’s geographical reach can also help stabilize a power supply that is heavily reliant on renewable energy. Wind power from sparsely populated Wyoming, for example, can help meet California’s end-of-day electric needs when millions of people return home and busy themselves with dinner preparations and other household chores. But that alone won’t ensure a balanced grid.

That’s where energy storage comes into play. For decades, utilities have relied on pumped hydro as a means of storing surplus electricity. Water is pumped into an elevated reservoir during periods when the grid has more power than it needs. Then, when demand warrants it, gravity-fed hydro turbines feed electricity back to the grid.

More compact, more scalable, and more easily sited than pumped storage, lithium ion batteries are quickly becoming the preferred power storage technology. At the household scale, batteries can capture electricity from a rooftop PV array during daylight hours, releasing that power to the grid or using it at home in the evening to charge an electric vehicle. On a larger scale, multiple megawatts of electricity can be stored by on-site batteries at commercial buildings or utility-scale solar plants. This approach has been pioneered in Hawaii, where the nation’s highest electricity prices make still-expensive battery installations economically viable.

Solar is a super-abundant resource, but its stepped-up use calls for fundamental changes in the way we generate, store, and use electricity. The dimensions and dynamics of an economy substantially fueled by renewable energy are just beginning to take shape.

AUTHOR
Philip Warburg, an environmental lawyer and former president of the Conservation Law Foundation, is the author of Harness the Sun: America’s Quest for a Solar-Powered Future.