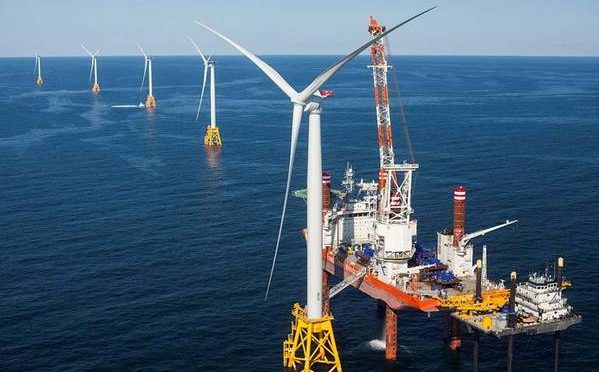 At the end of 2018, the global accumulated installed capacity of offshore wind power increased to 22,592 megawatts (MW).
According to a recent report from the US-based National Renewable Energy Laboratory (LNER), it is expected that the accumulated capacity of the offshore wind market will increase from 154 to 193 gigawatts (GW) by 2030, with a long-term forecast of more than 500 gigawatts by 2050.

According to the report “Market of Marine Wind Energy Technologies” of 2018, the global wind industry had a record of 5,652 megawatts (MW) of offshore wind capacity in 2018.

By the end of 2018, the global cumulative installed capacity of offshore wind power increased to 22,592 MW in 176 operational projects.

“Until December 31, the global pipeline for marine wind power development capacity was approximately 272,000 MW,” according to the report.

“The global pipeline for floating offshore wind energy reached 3,100 MW in 2018, with 38 projects announced and 44 MW of operational projects,” the report said.

In 2018, the development of offshore wind energy projects and the US operating pipeline grew 1.4% to a power generation capacity of 25,824 MW.

Industry forecasts suggest that US offshore wind capacity could grow from 11 to 16 GW by 2030.

In 2018, new commitments were added in Massachusetts (an additional 1,600 MW authorized by 2035), New York (6,600 MW added by 2035) and New Jersey (2,400 MW added by 2030), while Connecticut and Rhode Island agreed to purchase energy from the Revolution project 600 MW of Orsted, a new offshore wind farm located in northern Massachusetts-Rhode Island.

It was also noted that the pilot projects of floating marine wind energy are advancing, with a global pipeline that reached 3,100 MW in 2018, with 29 projects announced and 44 MW of operational projects.

The report covers the status of the 176 offshore wind projects in operation until December 31, 2018. The report also provides the status and analysis of a larger global portfolio of 838 projects at various stages of development.Enviar comentariosHistorialGuardadas