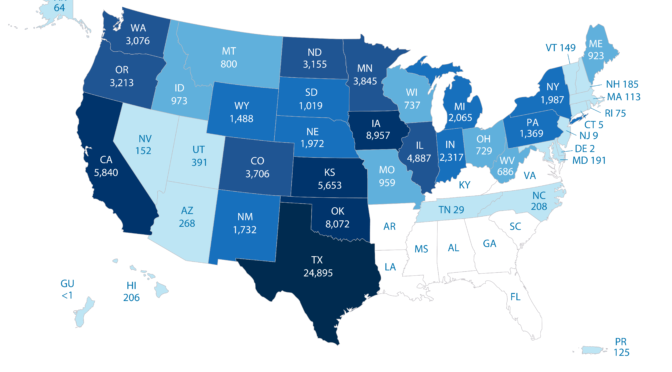 AWEA’s newly-released first quarter market report shows just how busy American wind power is—a record 39,000 megawatts (MW) of new wind turbines projects are now under construction or in advanced development. That’s about as much capacity as all the projects built to date in Texas, Iowa and California—the country’s number one, two and four wind states, respectively.

The first quarter report also shows an industry experiencing healthy growth, as the development pipeline is 17 percent larger than it was at this time last year thanks to strong demand from utilities and corporate buyers. Developers reported 6,156 MW of new wind project activity in the first quarter of 2019 alone. Likewise, power purchasers signed 2,717 MW of wind power purchase agreements during the first quarter, the second highest quarterly amount on record.

During the year’s first three months, Iowa, Michigan and Illinois led the way for new wind installations coming online. In total, the U.S. now has 97,223 MW of installed capacity, enough to power over 30 million U.S. homes.

Where is the wind development pipeline getting built? Across much of the country—it’s comprised of 199 project phases spread across 32 states, including six offshore wind projects. Texas unsurprisingly leads the way with over 8,500 MW of new wind under construction or in advanced development, followed by Wyoming (4,780 MW), New Mexico (2,635 MW), Iowa (2,623 MW) and South Dakota (2,127 MW). A total of 14 states now have over 1,000 MW of wind capacity in the pipeline, and eight states are on track to more than double their installed wind capacity.

All this activity means jobs for U.S. workers in farming and factory towns across the country. Over 114,000 Americans spread across all 50 states now work in wind, and their ranks will have to continue expanding as we turn the development pipeline into reality.

A public version of the first quarter market report is available for download here.