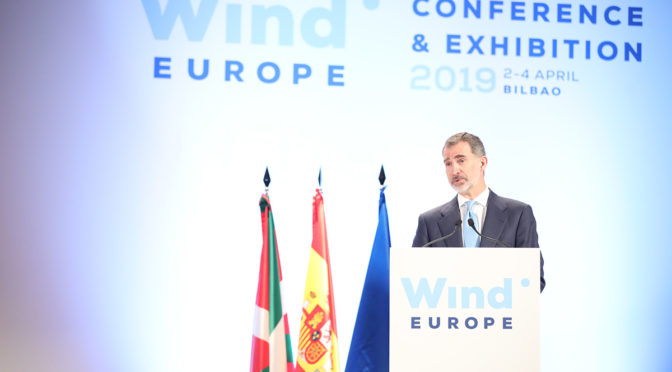 His Majesty King Felipe VI of Spain made an official visit to the 2019 WindEurope annual event in Bilbao today and delivered the keynote speech at the official inauguration.

The King’s speech focused on the economic benefits that come with addressing the challenge of climate change, which he described as “very alarming”. 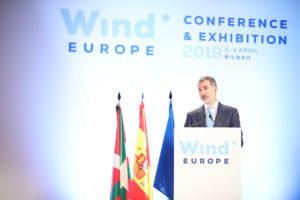 The King identified wind energy as a key part of the solution: “All of you here today represent part of the best response we can offer in the face of these existential challenges.” He described the energy transition as “a critical vector of change; one that not only allows access to energy at affordable prices, but that also brings with it many opportunities in business, technology, and employment.”

The King emphasised the wind sector’s industrial footprint and the importance of R&D: “[Wind] is indisputably one of the key sources of energy, and it is obvious that wind power is already transforming Spain, and Europe. That Spain exports wind technology is a well-known fact, a sector with a significant value chain, in which research and development have placed us third among European nations in terms of the number of wind patents.”

The King then spoke about the “remarkable opportunity” of the energy transition. “In our case, Spain may well have the greatest renewable energy potential in the EU. It has a geography of 50 million hectares…it has both Mediterranean and Atlantic winds, high levels of sunshine, large forests, and notable hydraulic resources. Lastly, a dense network of businesses and centres of technology, innovation, and knowledge.”

Finally the King told participants to, “Feel proud of these achievements, however not content. It may be so that many countries the world look over to Spain as a standard-setter of how to integrate renewable energies into the electricity networks, but we should not stop pushing even further in this and other areas, and stay at the forefront of this global transformation.”

WindEurope CEO Giles Dickson said: “We were honoured to welcome King Felipe VI of Spain to WindEurope’s annual event today. It’s a signal that the King recognises the importance of the wind industry to Spain’s economy. And that leading the energy transition is a remarkable economic opportunity. The wind sector is an industrial motor in Spain. It provides 22,500 jobs and significant export volumes. Spain, the Basque Country and Bilbao made a conscious decision to back wind energy and are now reaping the benefits in terms of jobs and investments. This is only set to grow. Spain aims to get 42% of its energy from renewable sources by 2030. And wind will play a central role in delivering this.”