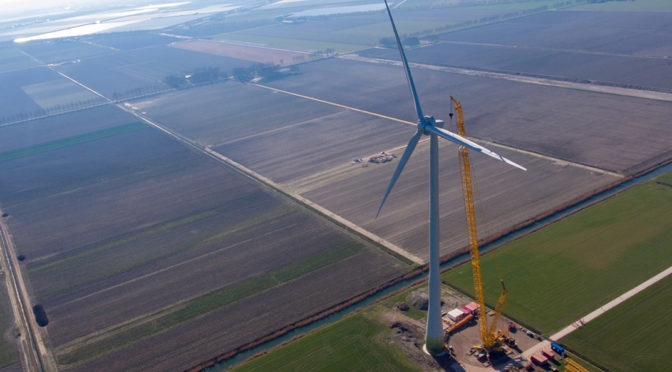 Wind energy is a well-established source of renewable energy, but what countries have the highest wind energy capacity in the world?
Wind power has become an important source of energy generation around the world, with global capacity reaching over 600GW in 2018. The construction of new wind power varies year to year and by region; Europe, for example, saw a 32% reduction in wind capacity in 2018 compared with 2017.
Wind energy by country: The top 10

But which countries have the highest capacity of wind energy? Power-technology.com looks at the top 10 countries by installed wind capacity in the world.

China is the world leader in wind energy, with over a third of the world’s capacity.

It boasts the world’s largest onshore windfarm in Gansu Province, which currently has a capacity of 7,965MW, five times larger than its nearest rival.

Despite its size, the Gansu turbines were described as looking “like scarecrows, idle and inert” by The New York Times due to low demand.

The US is in second place with 96.4GW of installed capacity and is particularly strong in onshore wind power.

Six of the largest 10 onshore windfarms are based in the US. These include the Alta Wind Energy Centre in California, the world’s second largest onshore wind farm with a capacity of 1,548MW, Shepherd’s Flat Wind Farm in Oregon (845MW) and Roscoe Wind Farm in Texas (781.5MW).

The state of Texas alone produces a quarter of the US’s wind power with 24.9GW, providing more wind power than 25 other US states combined.

Germany has the highest installed wind capacity in Europe with 59.3GW.

Its largest offshore windfarms are the Gode Windfarms (phase 1 & 2), which have a combined capacity of 582MW. Germany is also home to the Nordsee One Offshore Wind farm, which has a capacity of 382MW and provides energy for 400,000 homes.

According to Wind Europe, Europe installed 11.7GW of wind energy in 2018. Of this, Germany led the way with 29% of this capacity at a total of just under 3.4GW, with 2.4GW of this onshore and just under 1GW offshore.

India has the second highest wind capacity in Asia and is the only Asian country apart from China to make the list, with a total capacity of 35GW.

The country has the third and fourth largest onshore wind farms in the world, the Muppandal windfarm in Tamil Nadu, Southern India (1,500MW) and the Jaisalmer Wind Park in Rajasthan, Northern India (1,064MW).

The Indian government has set a target of installing 60GW of wind energy by 2022, with 25GW to be installed in the next three years.

Spain is a strong performer in wind energy, with a capacity of 23GW covering 18% of Spain’s electricity supply. The country is fifth in the world despite none of its onshore or offshore wind farms being in the top 20 largest by capacity.

The Spanish wind industry has actually been in a steep decline over the past few years. Just 104MW was added to its energy mix in 2016-2017 after nothing was added in 2015.

The UK is the third European country on the list, with a total capacity of just over 20.7GW.

The UK is particularly noteworthy in offshore wind, with six of the 10 highest-capacity offshore wind projects in the world.

One of these is the Walney project off the coast of Cumbria, North West England. This is the largest offshore wind project in the world with Walney 1 & 2 (367MW) and Walney Extension (659MW) forming a grand total of 1,026MW.

The Walney installation is set to be overtaken by the 1,218MW Hornsea One project in the North Sea when it is fully completed in 2020.

France is seventh on the list of top 10 wind energy countries by capacity. It is currently moving away from nuclear power, which previously delivered 75% of the country’s energy needs, and will fill the gap by increasing its renewable budget to €71bn for the period 2019-2028. This will allow it to triple its onshore wind capacity by 2030.

However, hostility to wind energy is “deeply rooted” in France, as much of the population considers wind turbines to be ugly and noisy.

Brazil has the largest wind capacity in South America with 14.5GW and is expanding its capacity significantly. The most recent figures show that wind power had increased by 8.9% year-on-year in February 2019.

There is some concern as to the future of wind energy under populist President Jair Bolsonaro. On the one hand he has shown support for expanding wind energy, but may also reduce subsidies due to neoliberal economic policies.

Canada’s renewable energy capacity stands at 12.8GW, with 566MW of new installed capacity added in 2018. This energy is generated by a total of 299 wind farms with 6,596 turbines.

Ontario has the largest amount of wind energy, with just over 5GW installed. These include the 230MW Niagara Region Windfarm and the 199.5MW Amaranth Windfarm, north of Toronto.

The largest wind farm in Canada is the Rivière-du-Moulin project in Quebec, which has a total capacity of 300MW.

Wind accounts for about 5% of Canada’s renewable energy supply, with hydroelectric way ahead at 67.5%.

In tenth place is Italy, which reached just over 10GW in wind energy capacity in 2018.

Until recently, Italy’s wind power was entirely generated with onshore wind, but this month German wind turbine manufacturer Senvion signed a deal with Renexia to build the first offshore farm off the coast of Puglia, Southern Italy.

Italy’s wind industry is heavily concentrated in the south and on its islands. All of Italian energy company ERG’s onshore wind capacity is based south of Rome for example, with Puglia (248.5MW) and Campania (246.9MW) being its strongest markets.
Jack Unwin
power-technology.com