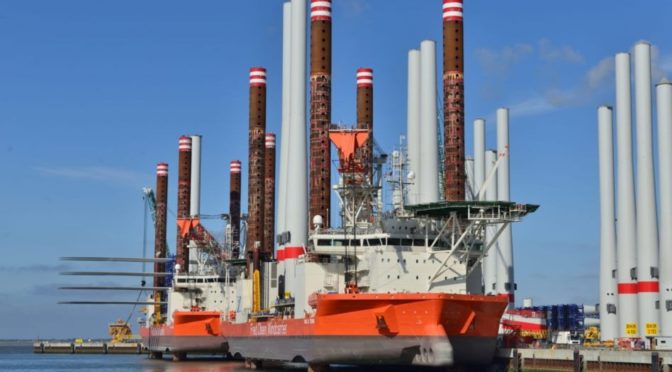 The company is expanding its fleet of CTVs as its strong support of the government’s policy of developing indigenous offshore wind farms.
aiwanese marine construction company Hung Hua Construction (HHC) signed a purchase agreement, followed by another MOU with Dutch shipbuilding company Damen for further joint cooperation, at one of the region’s largest wind energy expos, in support of the government’s renewable energy policy to move away from nuclear and coal-fired power generation.

The Asia-Pacific Wind Energy Exhibition, which is the first of its kind in Taiwan and the second largest wind energy trade show in Asia, kicked off at the Kaohsiung Exhibition Center on March 13.

HHC owns the largest fleet of nearshore working vessels in Taiwan. Over the past 40 years, it has been engaged in Taiwan’s marine construction, such as dredging and reclamation, wharf and breakwater construction, and seabed trenching work among others, having been awarded two Gold Quality Medals as well as a High Distinction Award by the Public Construction Commission.

The company started to delve into the business of offshore wind farm installation in 2015 in the wake of growing demand for renewable energy in the country, and later developed and built the island country’s first-ever self-elevating jack-up rig, marking a new milestone for Taiwan’s offshore wind energy engineering.

At the signing ceremony, Su Jin-Sheng (???), secretary general of the Bureau of Energy, Ministry of Economic Affairs, indicated that this emerging industry employs a high level of technology along with high risk, and there are several great challenges ahead in terms of skill training and defining equipment specifications in such a short period of time.

HHC procured two crew transfer vessels – FCS 2710 CTVs – from Damen in January of 2019, whose delivery is scheduled for February the next year as an important carrier to transport wind farm technicians and other personnel out to sites on a daily basis. The company is expanding its fleet of CTVs as part of its strong support for the government’s policy of developing indigenous offshore wind farms.

The MOU signed on March 13 between HHC Chairman Chen Chung-hsing (???) and Damen’s Asia-Pacific Sales Manager Michiel Hendrikx reveals a five-year investment plan of US$30 million to expand the fleet of offshore wind support vessels and to introduce a simulation training center, which will be designed to train local crew for the support work and to build the offshore wind power capacity.