The National Integrated Energy and Climate Plan (Pniec), whose referral to Brussels has been approved today by the Council of Ministers, foresees that installed wind turbines will double from 2015 to 2030 and that photovoltaic solar will be multiplied by nine, while nuclear power would be reduced to more than half. 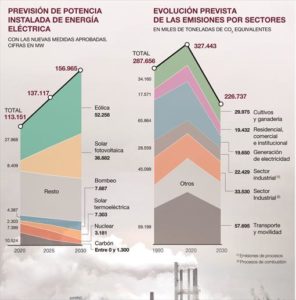 Thus, the Spanish electricity system would have by 2030 a total installed power of 157 gigawatts (GW), of which 50 GW will be wind power; 37 GW, solar photovoltaic; 27 GW, combined gas cycles; 16 gigawatts, hydraulic; 8 GW, pumping; 7 GW, concentrated solar thermal and 3GW, nuclear.
After the appearance of the minister for the Ecological Transition, Teresa Ribera, at the press conference of the Council of Ministers held this morning, AEE positively values ??the ambition of the Integrated National Energy and Climate Plan and the 2030 targets for wind energy.

The commitment of an energy model focused on guaranteeing the country’s energy transition places renewable energies in the main axis of change. For this reason, the Spanish wind farm sector values ??positively the presentation of the forecast of renewable power to 2030 for the long-term visibility it provides and for the ambition of the country in its environmental objectives.

The visibility granted by the PNIEC is something that the wind energy sector has been demanding for some time. Once the objectives of increase for each of the technologies are known, it will be necessary to provide the regulatory tools that allow to advance optimally, that is, with a linear growth rate of the technologies in the coming years, and that attract and secure the investments that are needed to undertake the transition.

In relation to the contribution of wind energy, the proposed objective of an installed power of 50,258 MW to 2030 in the PNIEC is consistent with what AEE has projected in its latest analyzes for an energy transition. Currently, wind energy in Spain totals 23,484 MW installed. The wind farm contribution to the system in 2018 was 19%. To meet the goal of 50 GW to 2030 it is necessary to install an average of 2,200 MW per year. AEE considers that this volume of new megawatts per year is feasible and the wind farm sector is prepared to face this challenge successfully.

In Spain there are multiple identified and mature projects with feasible wind resource locations and with modern wind turbines technology it will be possible that by 2030, wind will contribute 34% of total generation.

Wind energy is fully competitive and its technology is highly consolidated. The Spanish wind industry has 100% of the value chain located in Spain and is prepared to take advantage of the opportunity that the scenario embodied in the Plan represents. An opportunity that must be taken advantage of, which will result in industrial activity, creation of employment of value for the country, R & D development, generation of social and economic benefits for the environments where the new wind farms are manufactured and installed and, in general, a greater economic structure for the Spanish territory.

In this scenario, the auctions and their design will play a key role, but to be effective in result and cost efficient, the next step will be to dispose as soon as possible of an annual auction schedule with the volume that will be auctioned in each one of them, as have other countries such as Germany, Holland or France. The PNIEC identifies as action mechanisms the auction calls with a multi-year calendar up to 2030, which can distinguish between different technologies depending on their characteristics.

In this way, investors will be able to perfect their projects with time and the industry will be able to plan the most competitive products, which will result in a reduction in the costs of the facilities. It is essential that planning and auctions go hand in hand, so it will be more appropriate to use auctions with quotas for each technology, instead of being technologically neutral.