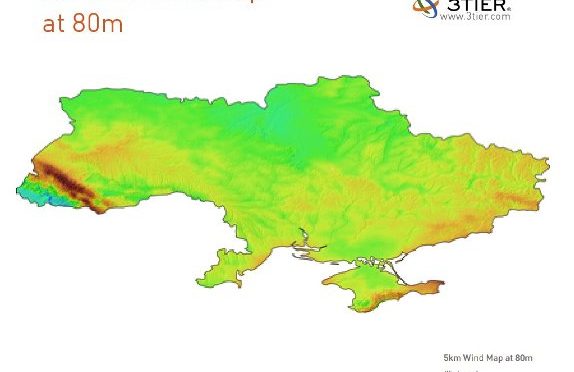 NBT AS (“NBT”), a utility-scale wind power developer based in Oslo, and Total Eren SA (“Total Eren”), a leading renewable energy Independent Power Producer (“IPP”) based in Paris, have signed definitive financing agreements for the first phase of a 250 MW wind project located in the Kherson region of Ukraine. The €155M financing agreement was signed at a special meeting of Ukraine’s National Investment Council in Davos. The project’s start of construction is imminent.

The onshore wind project, called Syvash wind farm (“Syvash”) has been developed by Norway-based NBT together with France-based Total Eren. At its full capacity, Syvash represents a €380 million total investment. Syvash will consist of 64 wind turbines and will be located on 1,300 hectares of land in the southern Kherson region of Ukraine. Once completed, it is expected to become the country’s largest renewable energy project.

Syvash is the first internationally financed large-scale wind farm in Ukraine. An A/B loan of up to €155 million has been raised for the construction of the initial 133 MW phase. It will consist of a €75 million EBRD loan, while B-Loans of up to €75 million will be provided jointly by the Green for Growth Fund (GGF) and the Netherlands Development Finance Company (FMO). A parallel loan of €5 million will be provided by the Nordic Environment Finance Corporation (NEFCO).

The Syvash wind farm will be built to very high international standards, conforming to EBRD Performance Standards and Equator Principles. The electricity generated from Syvash will be sold to state-owned company “Energorynok” – Ukraine’s wholesale electricity market operator. Once the full project is constructed, it will have a planned production of 850 GWh per year, and will generate enough electricity to meet the needs of approximately 100,000 households in the municipality of Rivne, in Ukraine. It is expected to reduce CO2 emissions by 470,000 tonnes per year, hence creating a positive impact on the environment.

The Engineering, Procurement and Construction (EPC) contract has been signed with PowerChina, one of the largest power plant construction companies worldwide and Nordex Group, a leading producer of onshore wind turbines. Construction work is expected to start in a few weeks. The project will bring economic development and significant tax revenues to the Kherson region and will have a lasting economics impact even after its construction is completed.

Syvash represents Total Eren and NBT’s first project in Ukraine, a country with high potential for renewable energy sources, combined with strong local support from the Ukrainian Government, the Office of the National Investment Council, regional authorities and other partners to develop the Ukrainian renewable energy market.

David Corchia, CEO of Total Eren, stated: “This signature marks an important milestone for Total Eren in extending its development efforts to Eastern Europe with a project of this scale. We are proud to have mobilized, together with our partner NBT, this trusted lender group led by EBRD and look forward to starting construction and finalizing the second phase of the project. We see tremendous potential for further development for Total Eren in Ukraine.”

Joar Viken, CEO of NBT, stated: “We are extremely happy that we can invest along with our strategic partner Total Eren in utility-scale wind farms that will power the sustainable future growth of Ukraine. The 250MW Syvash wind farm is just the start of our plans to invest a considerable amount of capital in our large pipeline of wind projects in Ukraine over the next two to three years. With improved business climate in Ukraine and success of this international project financing, we envision that private commercial institutions and international investors will see the benefits of investing in Ukraine. In addition, we foresee potential interest for Green Bonds to financing NBT’s pipeline of new wind projects in Ukraine. We look forward to working with the Government of Ukraine and our strategic partners to support our expansion plans for investing in wind power in Ukraine.”

Founded in 2012 by Pâris Mouratoglou and David Corchia, Total Eren has built up a substantial and diversified portfolio of wind, solar and hydroelectric assets representing an installed gross capacity of more than 1,300 MW in operation or under construction worldwide. Through partnerships with local developers, Total Eren is currently developing numerous energy projects in countries and regions where renewable energy represents an economically viable response to growing energy demand, such as in Asia-Pacific, Africa and Latin America. Its objective is to achieve a global net installed capacity of more than 3 GW by 2022. On 1 December 2017, Total S.A, the major energy company, acquired an indirect 23% interest in Total Eren.

Ukraine AS is a developer and operator of utility-scale wind farms in emerging markets. The company was founded in 2004 and is based in Oslo, Norway. NBT has operations in Norway, China, Cyprus, Sweden, Singapore and Ukraine.