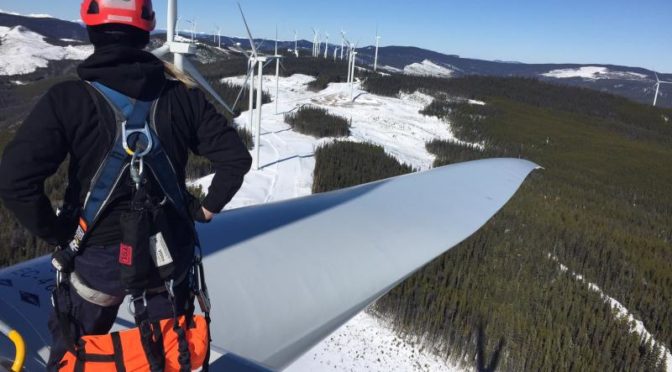 November is here, and that means peak foliage, turkey stuffing, and the release of Lazard’s Levelized Cost of Energy analysis. For electricity geeks, it’s an early holiday gift. And each year the gift keeps getting better and better for renewable energy.

Both the wind and solar industries are relentlessly driving down cost and improving technology performance, and the technologies are now in a better position to compete than ever before. In fact, according to Lazard, wind is the cheapest source of new power generation in many U.S. markets (regardless of incentives). Even more exciting, wind is quickly becoming competitive with existing conventional power plants, positioning it for continued growth in an era of relatively flat electricity demand.

The longer answer: it largely depends on what part of the country you are in. In areas where winds are strong and steady, wind is unambiguously the cheapest option for new power. Think of states like Texas, Oklahoma, Kansas, and up through the Dakotas. In these strong wind regions, Lazard pegs the levelized cost of energy (LCOE) for wind to be as low as $29 per megawatt hour (MWh). As you move to less windy places, the cost increases but wind remains competitive with other technologies.

The low cost of wind energy today is due to the rapid cost reduction American wind power has achieved over the last decade. Looking back to 2009, the industry has been able to lower the cost of wind energy 69 percent. In more concrete terms, the lowest cost MWh of wind energy generated in 2009 cost $101 to produce. Today, the same MWh costs $29. That is a $72 discount!

Even further cost reductions are expected in coming years as the technology scales and further innovations are realized. As a result, companies like NextEra Energy Resources are predicting the cost of wind energy to fall between $20-$25/MWh absent the PTC in the mid-2020s.

Importantly, the low cost of wind doesn’t fluctuate over time. When locking in a contract with a wind power plant, buyers get complete price certainty, because there are no fuel costs that could change over time—after all, the wind is always free. Because wind contracts commonly stretch 20 years or more, utilities and consumers can be assured of low prices for decades.

In contrast, conventional power plants are subject to fuel price volatility. For example, a 25 percent increase in the cost of natural gas can result in a five percent increase in the LCOE of a combine cycle plant. Typically, these costs are passed along to consumers. So wind’s stable prices help keep more money in the pockets of American families and businesses. For example, wind saved Texans $5.7 billion from 2010 to 2017, according to a recent report.

Lazard’s analysis also highlights the emerging trend of renewable energy becoming increasingly cost competitive with existing power plants. This is especially true for wind, which is now competitive in strong wind regions with the marginal cost of electricity generation from existing resources such as coal and nuclear power. And if the industry can achieve the $20-$25/MWh price mark post-PTC, the economics will be even more compelling to use wind to supply more of America’s electricity moving forward.

This report adds another chapter to the record showing the strong downward cost trajectory of wind and solar power in the U.S. With further cost reductions expected, the outlook for wind energy remains bright.