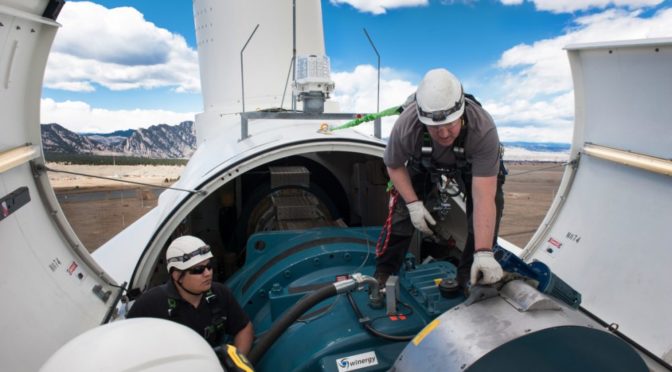 As the saying goes, there are few certainties in life other than death and taxes. Having tax policy certainty is important for business, particularly when companies are making new investments.

But the United States House of Representatives’ proposal for tax reform that was recently rolled out would unfairly put a retroactive tax hike on an entire industry that’s vital to families and the local economy here in Pueblo — the American wind industry.

What’s more, the House plan breaks a promise made by members of Congress in both parties, threatening American job growth, rural investments and energy dominance. Its version of the bill would retroactively change how wind power projects qualify for the credit and end its adjustment for inflation — cutting the value of the credit by at least 50 percent. Private investors who put billions of dollars into factory orders and construction contracts cannot go back in time to meet the revised requirements. Thankfully, the Senate’s version, introduced last week, rejected the House plan to unnecessarily attack the American jobs and investment that Colorado’s Eastern Plains and Pueblo have benefitted from greatly.

Across the country, companies relying on the predictability of a previously agreed-to phaseout of the wind power production tax credit, part of a bipartisan agreement just two years ago, now face tremendous uncertainty, threatening thousands of jobs and billions of dollars of investment. The tax credit has led to the creation of thousands of direct manufacturing jobs at plants like Vestas, but also for businesses that provide different components that go into making a finished windmill. At Leeco, we provide steel plates to the Vestas tower factory in Pueblo and have since its opening in 2009.

American wind power is a proven job creator, adding jobs nine times faster than the overall economy last year and many of them were in our region. Maintaining the current stable investment policy will create an additional $85 billion in economic activity through 2020, according to Navigant Consulting. It will also grow an additional 50,000 American jobs, including more than 8,000 jobs at U.S. factories, by the end of President Donald Trump’s first term.

And now months to years after the ink has dried on the contracts that would deliver those private investment dollars, factory orders and construction contracts, the House is trying to change the terms of the contract. Going back in time to change the rules not only kills those business deals, it also kills the investment and jobs that go with it.

We know that wind works for America. Here in Pueblo, we work closely with Vestas to build wind towers, employing hundreds of local residents. These jobs were made possible by the certainty these tax credits provide both our companies.

By breaking its promise to the wind industry, Congress wouldn’t just hurt the investors, manufacturers and developers whose deals are undermined. The harmful effects of the House bill would have a ripple effect across the wind energy supply chain, ultimately harming thousands of American workers and families.

No American job is safe if Congress can change the terms of business contracts years after agreements are signed and billions of dollars are spent. That’s not pro-growth tax reform, that’s bad business.

The people who benefit from wind energy in this country are not strangers. They are the backbone of our communities, our returning veterans, our teachers, nurses, neighbors and family members. Congress needs to listen to them and fix the tax reform plan so it honors the commitment it made to keep wind jobs and factories growing.

John Purcell is vice president of the energy division for Leeco Steel, LLC.