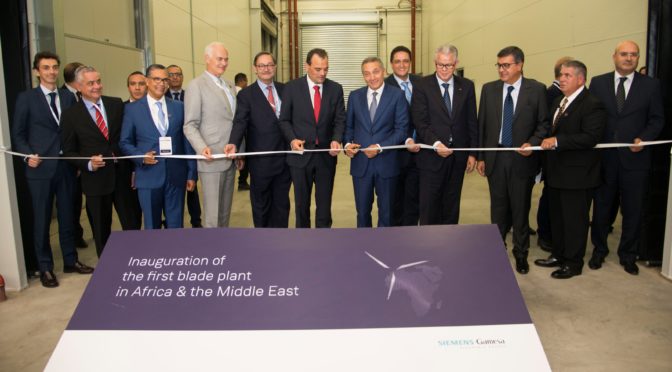 The first blade plant of a wind turbine manufacturer in Africa and the Middle East is ready to offer wind turbine blades ‘100% made in Morocco’. To equip the SWT-DD-130 platform turbines (up to 4.2MW power rating), B63-10 blades with a length of 63 meters are produced for export to Europe, Africa and the Middle East, as well as for local projects. The plant is ready to produce other blade models in the future, which could reach up to 75 meters. These integral blades are based on licensed technologies and made of composite materials.

The plant of 37,500 square meters, which started production in April 2017, is strategically located in the industrial zone of Tanger Automotive City, at approximately 35 kilometres from Tanger-Med port and ideally positioned between Europe and Africa.

Markus Tacke, CEO of Siemens Gamesa, explained the solid business rationale for this project. “This factory is good for our company and a solid business decision. We invest where we see strong business opportunities, and the opportunities here in Morocco are stronger than ever before. This location in Tangier provides us with direct access to some of the most important markets of tomorrow – here in Morocco, throughout the Middle East, in Europe, and in the Mediterranean Region.”

In the context of the Accelerated Industrialization Plan launched in April 2014 by the Ministry of Industry, Investment, Trade and Digital Economy, the blade plant will create 600 attractive jobs, as well as an estimated number of 500 auxiliary jobs. The Minister of Industry, Investment, Trade and Digital Economy, Mr El Alamy, underlined the importance of this project: “The first wind turbine blades in Africa and the Middle East will be produced in Tangier and it represents a pride for the Kingdom. This pioneer project allows localizing value and announces the development of an ecosystem “renewable energy industry” which reinforces the strategic choices of Morocco, under the leadership of His Majesty King Mohammed VI, aimed at the development of a green economy.”

A training center of 3,500 square meters was created to facilitate the knowledge transfer from Denmark to Tangier. The learning process ensures the complete transfer of the technical and process skill sets necessary to optimize the manufacturing process.

TMSA (Tanger Med Special Agency) responsible for the planning, the development and the management of the Tanger Med Port complex and industrial platform, has shown great support and insight in the achievement of this project. Mr Fouad Brini, President of TMSA, rose that “the Siemens Gamesa project confirms the compelling offer of Tanger Med for multinationals. We are delighted about the uniqueness of Tanger Med’s value proposition, combining quality of the infrastructure and the perfect alignment between port and industrial zone that met Siemens Gamesa’s expectations”.

“In Morocco, the demand for electricity increased at an average annual rate of 6.7% from 2003 to 2013. Thus, renewable energy is particularly attractive, offering a secure supply of domestically-produced power and contributing to energy independence. Our commitment to the government and people of Morocco is clear: we will work together with you in meeting your energy challenges, today and in the future”, concluded Ricardo Chocarro, Onshore Business CEO of Siemens Gamesa.

The new blade factory plays an important role in contributing to the Morocco’s national program to achieve production of electricity from clean energy to up to 52% by 2030, of which 20% is generated by wind. The 850MW project that will be built by the consortium Siemens Gamesa, Nareva and ENEL represents a major milestone in this goal.

Siemens Gamesa is market leader in Africa with over 15 years of existence and 2,1 GW installed capacity, in countries like Morocco, as well as in Algeria, Egypt, South-Africa, Tunisia, Mauritania, Kenya and Mauritius Islands.