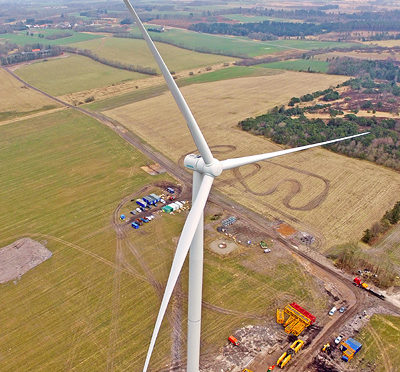 Four new onshore-projects with a combined rating of more than 84 megawatts (MW) will extend Siemens Gamesa’s fleet of direct-drive wind turbines with a further 27 units. Customer GETEC green energy AG has ordered nine SWT-3.2-113 wind turbines for the Energiepark Profen project located in Saxony-Anhalt. An additional five units of the same model will be installed at PNE WIND’s Bederkesa-Alfstedt wind power plant near Bremerhaven. 11 SWT-3.0-113 wind turbines will be installed at the Straubenhardt project in Baden-Württemberg developed by WIRSOL. Finally, two Siemens Gamesa direct drive wind turbines, one SWT-3.15-142 and one SWT-3.2-113 will be installed near the town of Vetschau in Brandenburg. The installation at the VentusVentures project marks the German debut of the company’s low-wind turbine with 142-meter rotor.

For decades, the Profen community in Saxony-Anhalt was characterized by surface mining of lignite. GETEC green energy AG, based in Magdeburg, has begun to establish a modern energy park at the former mining area, with a 28.8 megawatt wind power plant at its center. GETEC selected Siemens Gamesa direct-drive wind turbines for the Profen site following a successful collaboration on Zerbst project. By late 2017, nine units of the SWT-3.2-113 are planned to be grid-connected. The wind turbines will be installed on steel towers at hub heights of 115 meters. In addition, GETEC has signed an O&M contract with Siemens Gamesa including full service for 20 years.

Cuxhaven-based PNE WIND AG is another Siemens Gamesa customer who has selected the proven gearless technology. For its Bederkesa-Alfstedt wind power plant, PNE WIND AG has ordered turbines with tall towers: Siemens Gamesa will install five SWT-3.2-113 wind turbines on the site in the Geestland-area close to Bremerhaven on 115 meter tall steel towers. The installation is scheduled to be completed in autumn 2017, and commissioning is planned for late 2017. A 15-year service contract is also included.

The Straubenhardt project located close to the corresponding community near the city of Pforzheim in Baden-Württemberg will also be equipped with SWT-3.0-113 wind turbines. The 11 units will reach a total capacity of 33 MW. Siemens Gamesa will install the turbines on hybrid-towers combining concrete and steel at hub heights of 142.5 meters. Customer WIRSOL Windpark Straubenhardt GmbH & Co.KG will also include local content in the project. The installation will start in late summer 2017 with commissioning by beginning of 2018. Siemens Gamesa has also been awarded a 15-year service and maintenance contract for the wind power plant.

The Vetschau wind power plant in the Spreewald-region in Brandenburg will feature the German debut of Siemens Gamesa’s direct-drive low-wind turbine with a 142 meter rotor. The existing wind power plant will be extended by 6.4 megawatts with the first German installation of a SWT-3.15-142 wind turbine, and one SWT-3.2-113 turbine. Both units will be installed in late summer of 2017 on steel towers with hub heights of 129 and 127.5 meters. Commissioning is expected for autumn 2017. Customer VentusVentures has also ordered full service over a period of 20 years. All four projects have been already booked by the end of the third quarter of Siemens Gamesa’s FY 2016/17.

Siemens Gamesa’s German wind fleet installed over the last years sums up to more than 2,500 onshore wind turbines with a combined rating of more than 5,8 gigawatts (as of the end of June 2017). In order to allow for practical safety-trainings in Germany – covering even the latest generation of wind turbines – the company amplified its collaboration with the Schleswig-Holstein-based provider OffTECBase in 2016. At the Enge-Sande training center, two SWT-3.6-130 wind turbines have recently been commissioned. These turbines are now available for various technician trainings.