American wind power’s future growth will be driven by a diverse range of customers and trends. Leaders representing a corporate purchaser, deregulated utility, a public utility commissioner, and a wind developer, discussed a few of those trends – demand from diverse customers, transmission expansion, falling costs, and storytelling – on the closing General Session panel as the WINDPOWER 2017 Conference wrapped up this week in Anaheim. 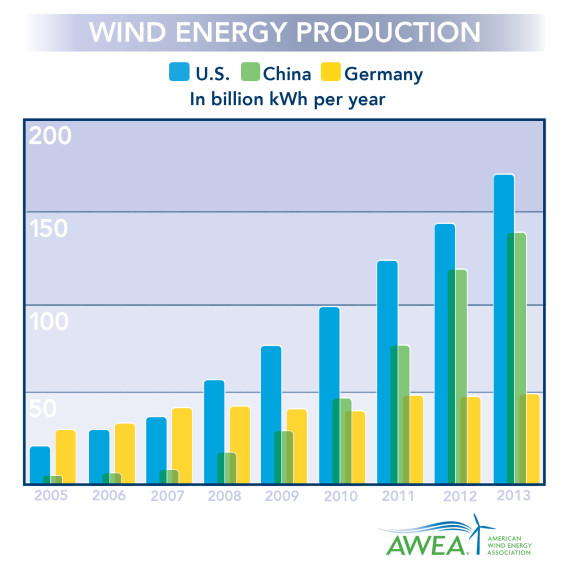 There are many customers for wind energy, including utilities, Fortune 500 brands, cities, and universities. Demand is strong because low, stable prices for wind help these companies and organizations improve their bottom line while also helping them reach sustainability targets.

“If you look at our panel, you have a developer, a utility, a regulator, and a corporate purchaser,” said Rob Threlkeld, Global Manager, Renewable Energy, for General Motors. “There’s your message. We’re at the point where wind and solar have become mainstream technology.”

General Motors has signed several long term contracts for wind energy, including to supply an assembly plant in Arlington, Texas, that makes 1,000 SUVs a day. The company has also committed to RE100, to source all of their global electric power from renewable sources by 2050. GM isn’t alone, other Fortune 500 brands including Amazon, Microsoft, and Walmart have all purchased wind energy.

Threlkeld added, “Look at GM’s supply chain. How many thousands of suppliers we have that are interested in renewable energy as well.”

“By continuing to get cost competitive, continuing to improve the wind energy product – it’s already great – you’ll capture a lot of potential customers out there, not only public utilities and corporate purchasers, but municipal utilities, rural co-ops, and other entities,” said Buzz Miller, President and CEO, Southern Power, a deregulated utility and power producer.

Miller added, “Whether it’s electric vehicles or renewables, what customers want will ultimately drive it.”

Expanding and upgrading our nation’s vital electric transmission infrastructure can help connect world-class U.S. wind resources to load centers like cities and factories. That will help save consumers money and boost the reliability and resiliency of the U.S. electricity supply.

“Wind can stay attractive. You fix some of the transmission issues around, keep vibrant, and we can get through that [the PTC phase out],” said Miller.

Wind power has grown rapidly over the last few years. Rapidly changing technology and falling costs have resulted in wind supplying over 5 percent of U.S. electricity, and more than 20 percent of electricity in five states. Wind power also supports over 100,000 American jobs. Telling the story – how wind works for America – is more important than ever.

“We have massive room to grow in telling the story of wind power,” said Miller. “One of the greatest infrastructure successes is tied to the wind energy PTC, thousands of megawatts, billions of dollars of investment, and the jobs that go with it.”

AWEA CEO Tom Kiernan in his remarks and columns this week in trade media described 16 trends that will continue to buoy the industry beyond 2020, once the wind energy Production Tax Credit (PTC) completes its current phase out. They include the falling cost of wind energy, expanding state policies like California’s, and upgrades to the nation’s power grid and transmission infrastructure.

As thousands of attendees head home from Anaheim, show organizers reflected on success this year while looking ahead to WINDPOWER 2018, May 7-10 in Chicago.

“WINDPOWER in Anaheim brought more action than ever to the show floor,” said Jana Adams, AWEA Senior Vice President of Membership Value and Experience. “From the design of our exhibit space, to the broadcasting of our general sessions, and spotlight on new exhibitors, we’re maximizing opportunities to make connections and ink new deals.”

Attendee Neal Gyngard agreed, “The biggest thing out of this, is to finally get to meet some of these people I’ve emailed with for years. You’re chatting with someone at WINDPOWER and you realize they helped you get a torque wrench three years ago. And the reception at Angel Stadium, that was an awesome way to kick it off, so much fun.” Gyngard organizes a network of wind turbine technicians, the “Tower Climbing Grease Monkeys”.

Adams added, “We’ve already sold over 90 percent of the exhibit space for next year’s conference. We think you’ll be blown away when WINDPOWER 2018 arrives in the Windy City.”

A media kit for the conference is available here: www.awea.org/WINDPOWER2017MediaKit