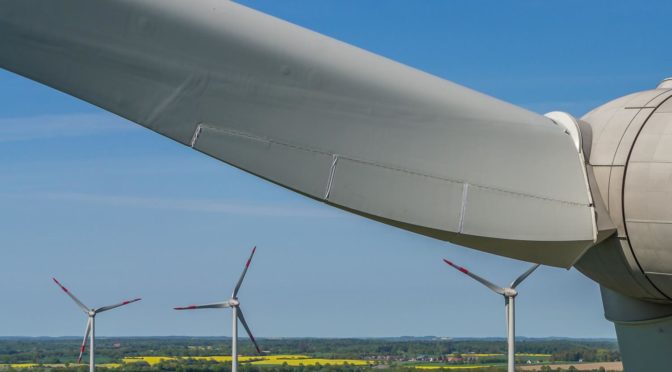 GE (NYSE:GE) the world’s leading Digital Industrial company, announced today that it has completed the acquisition of LM Wind Power, a Denmark-based technology developer and manufacturer of rotor blades to the wind industry. The completion of the transaction follows regulatory approval in the European Union, the United States, China, and Brazil.

GE reached an agreement with the London-based private equity firm Doughty Hanson in October 2016 to purchase the company for €1.5 billion ($1.65 billion). The transaction in-sources wind turbine blade design and manufacturing for GE’s Renewable Energy business, improving its ability to increase energy output and create value for onshore and offshore wind customers. The deal will be accretive to GE earnings in 2018.

Jérôme Pécresse, President and CEO of GE Renewable Energy, said, “The completion of the LM Wind Power acquisition provides us with the operational efficiencies necessary to support the growth of our wind turbine business, which is the fastest growing segment of power generation. With LM’s technology and blade engineering, we are now able to improve the overall performance of our wind turbines, lowering the cost of electricity and increasing the value for our customers. Together, we are set to capitalize on the expansion of renewable energy and be a growth engine for GE.”

Marc de Jong, CEO of LM Wind Power, said, “LM Wind Power has had a long-standing partnership with GE that has yielded many innovations and commercial successes, including the installation of the first-ever offshore wind farm in the United States. We see many digital and advanced manufacturing technology capabilities that will help accelerate our technology development and increase our customer reach.”

LM Wind Power will be run as an individual operating unit within GE Renewable Energy, providing blades for both GE’s onshore and offshore wind business units. LM Wind Power will also continue to supply blades to the rest of the wind industry, having established protocols and safeguards to protect customers’ confidential data.

With this deal, GE continues to deepen its capabilities and ambitions in renewable energy. In the past year, GE has delivered the first offshore wind farm in the US, won its first offshore project in China, launched its onshore digital wind farm and digital hydro plant, and developed hybrid projects in wind-solar and hydro-wind.

GE’s goal is to deliver renewable energy projects locally that maximize electricity output while reducing the cost of electricity, bringing affordable, sustainable energy to the world and more value for its customers.

GE Renewable Energy is a $10 billion start-up that brings together one of the broadest product and service portfolios of the renewable energy industry. Combining onshore and offshore wind, hydro and innovative technologies such as concentrated solar power, GE Renewable Energy has installed more than 400+ gigawatts capacity globally to make the world work better and cleaner. With more than 12,000 employees present in more than 55 countries, GE Renewable Energy is backed by the resources of the world’s first digital industrial company. Our goal is to demonstrate to the rest of the world that nobody should ever have to choose between affordable, reliable, and sustainable energy.