Siemens celebrated the topping out ceremony for its new wind turbine manufacturing facility in Cuxhaven, Germany, attended by Parliamentary State Secretary Enak Ferlemann, Lower Saxony’s State Secretary of Economic Affairs Daniela Behrens, and the Mayor of Cuxhaven, Dr. Ulrich Getsch. The structural steel uprights now stand for the production building, which will offer 56,000 square meters of floor space. This new facility in northern Germany is one of Siemens’ most important investment projects in recent years, with some EUR 200 million invested in what is the company’s first offshore wind turbine production plant in Germany. 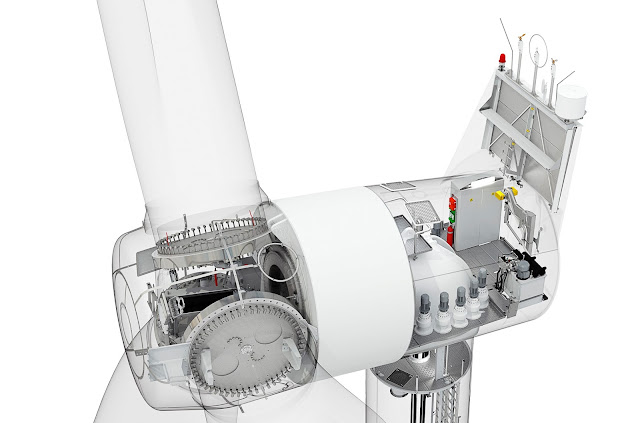 “In celebrating this topping ceremony, we mark another important milestone for our new, state-of-the-art production site for offshore wind turbines in Cuxhaven,” declares Markus Tacke, CEO of Siemens’ Wind Power and Renewables Division. “The new manufacturing plant is part of our efforts to establish offshore wind power as a key pillar of a sustainable energy mix. At the same time we’re creating up to 1,000 attractive jobs here and thereby supporting sustainable structural change in the coastal region.” Siemens has already received almost 1,600 job applications so far. A number of suppliers who will serve the plant have also announced plans to establish local businesses.

Enak Ferlemann, Parliamentary State Secretary at the Germany’s Federal Ministry Transport and Digital Infrastructure, underscored the significance of the project for offshore wind power in Germany. “Siemens’ new production plant in Cuxhaven sets an important signal for further expanding offshore wind power in Germany. The power generated by offshore wind farms will contribute substantially to our future energy mix, while simultaneously helping us to achieve the climate goals of the Paris Agreement.”

As Daniela Behrens, State Secretary at the Lower Saxony Ministry of Economic Affairs, Employment and Transport, declared, “Siemens’ new manufacturing plant is and will be the single most important anchor for the new German offshore industry center in Cuxhaven, and underscores the essential role Lower Saxony is playing as Germany’s leading energy-provider state and driver of the nation’s energy transition. We heartily welcome this positive development for Cuxhaven and the entire region.” Many new future-fit jobs are being created here along with high-quality infrastructure which, all told, will strengthen Lower Saxony as a business location.

“The city of Cuxhaven is extremely pleased that, with this topping off ceremony today, we’re able to celebrate yet another milestone achieved in establishing Siemens’ new production site,” declared Dr. Ulrich Getsch, Mayor of Cuxhaven. “Siemens is creating attractive jobs here and further expanding the region’s know-how.”

There is a growing market for wind turbines designed for erection off shore. Offshore wind power plants are currently being built primarily in the North Sea and Baltic Sea off Europe’s northern coastline. However, wind power projects are being developed in other regions, as well, such as along the East Coast of the United States and in Asia off the coast of China and Taiwan.