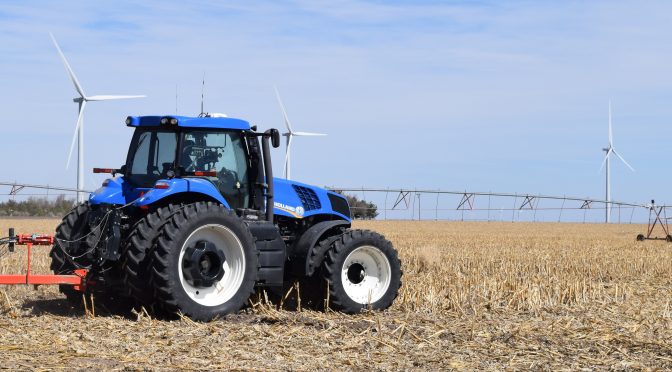 We often talk about how wind energy is a drought-proof cash crop for farmers and ranchers, providing steady income they can count on when the rains don’t fall or the fields don’t produce as expected. And that income is sizeable– landowners were paid $222 million in lease payments in 2015 alone. That’s why some observers are calling wind power “the new corn.”

But what does this mean for their day-to-day operations?

Dr. Sarah Mills of the University of Michigan’s Gerald R. Ford School of Public Policy recently took a deeper look at this question in a paper entitled, “Farming the wind: The impacts of wind energy on farming.”

She sent a survey to 14 farmland townships throughout Michigan, and received responses from over 1,200 landowners. Here are a few key findings:

While Dr. Mills’s findings are limited to Michigan, the story seems to be same across the U.S.

“Farming right now is very tight, margins are very thin, and of course extra income like that always helps,” Twane Reker, a third-generation Colorado farmer told me when I visited him in March.

Across the country in New York, lifetime dairy farmer Jack Bossard recently told me, “Any little bit helps in the dairy business. Whatever income we get I tell my wife we don’t have to feed them, we don’t have to clean up after them. So they are there, and whatever they produce is pretty, it’s helpful.”

It’s not always easy to bring new economic development to rural communities, for a variety of reasons. But wind power is providing an important boost to agricultural America, and Dr. Mills’s study offers yet another data point proving it. To learn more about the community benefits wind energy offers, take a look at this video.