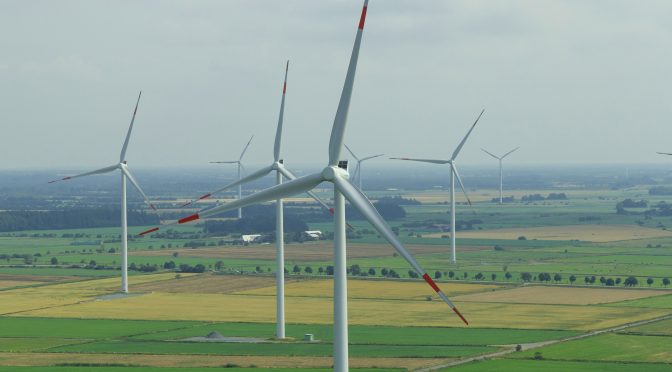 Direct-drive wind turbines from Siemens are gaining ground on the German market: Siemens has now received five orders for 23 of these state-of-the-art wind turbines. Two of the wind farms are situated in Germany’s northernmost state of Schleswig-Holstein, while the other three are to be erected in Lower Saxony. Installation of all five projects, comprising anywhere from one to eight of these gearless units each, is to be completed by the spring of 2017.

The first Siemens model SWT-3.3-130 wind turbine to be installed in Germany is to be erected in Schleswig-Holstein by the end of this year in the municipality of Südermarsch near the town of Husum. This unit that Siemens is installing for Südermarsch Wind GmbH & Co. has an 85-meter hub height on a steel tower and a rotor diameter of 130 meters designed to operate in moderate wind speeds and deliver a rated electrical generating capacity of 3.3 megawatts (MW). Six other wind turbines of this model make up the Damme Wind Farm project being erected near the city of the same name in Lower Saxony. Owing to the wind conditions at this site, however, Siemens will install the units on steel tube towers with a hub height of 135 meters. Both projects are scheduled to go on line by the end of this year.

The five model SWT-3.0-113 wind turbines that Siemens is currently installing on steel towers for the Beedenbostel Wind Farm near the town of Celle in Lower Saxony have a hub height of 115 meters. These 3-MW-Class units with rotors measuring 113 meters in diameter are replacing five older turbines at the farm as part of a repowering project. The five new wind turbines are to take up operation in early 2017. The operator is the Dean Group headquartered in the town of Neustadt am Rübenberge.

Siemens is delivering eight more wind turbines of the same model to its customers innoVent and Jade Concept for the Bollenhagen Wind Farm in the Wesermarsch marshlands near the city of Oldenburg. The hub height of these units is 92.5 meters. Planning calls for this 24-MW wind park to begin commercial operation already by the beginning of 2017. While the wind turbines Siemens is supplying its customer Denker & Wulf AG are of equal hub height, they are model SWT-3.2-113 units destined for the Quarnbek Wind Farm project. This trio of wind turbines, delivering a total output of 9.6 MW, is currently being installed in the community of the same name on the A210 Autobahn between Rendsburg and Kiel. Working in close cooperation with the developer, the project team accelerated construction times so that commissioning can take place before the end of this year.

“Our exceedingly economical gearless wind turbines are bestsellers in windy northern Germany, as these five new projects in Lower Saxony and Schleswig-Holstein underscore once again,” states Thomas Richterich, CEO Onshore of Siemens’ Wind Power and Renewables Division. “With the larger rotor diameters in our newly expanded wind turbine portfolio, we are set to continue the success story of our highly efficient technology at onshore sites as well.”