Nordex has installed the world’s tallest wind turbine to date in Hausbay in the German state of Rhineland-Palatinate. With a hub height of 164 metres and a rotor length of 65.5 metres, the N131/3300 wind power system reaches a total height of just under 230 metres. 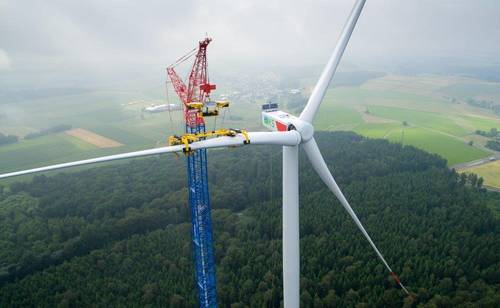 Located roughly 100 kilometres west of Frankfurt/Main, the “Hausbay-Bickenbach” wind park has been developed by Kreuzberger & Spengler Regenerative Energie from Dunningen-Seedorf.

The 164-metre hybrid tower is made of a 100-metre concrete tower and two tubular steel tower segments. Over the last few years, this design has been used for over 500 Nordex N117 and N131 wind power systems with a total of height of up to 200 metres. Consequently, this enhanced version incorporates considerable practical experience.

With a total height of just under 230 metres and a lower blade tip height of 100 metres, the N131/3300 will be able to make use of air layers offering a greater yield, thus increasing annual output. At the same time, it is exposed to less turbulence in hilly and forest-rich terrain. Certified in accordance with Dibt (German Institute for Building Technology) guideline 2012 for wind zone S, the turbine is particularly designed for low-wind regions with wind speeds of an annual average of up to 7.5 m/s.

Type testing for the N131/3300 with a hub height of 164 metres was completed in January of this year. Noise emission and measurement reports for the 3 MW and the 3.3 MM version of the N131 are also available.

The “Hasbay-Bickenbach” project uses a 100-metre concrete tower supplied by long-standing Nordex partner Max Bögl for the first time. As a leading producer of prefabricated parts, the group has been building combined prestressed/steel hybrid towers since 2010. Production of the 3.80-metre tall elements with a uniform wall thickness of 30 centimetres at the company’s own facilities ensures consistently high quality and precision of the components, enabling the hybrid tower to be assembled within two weeks.

The N131/3300 is a new version of the N131/3000 from the Generation Delta range. With a rotor diameter of 131 metres and a nominal output ten percent higher than that of the N131/3000, it can boost yields by between four and six percent depending on the location. Via the N131/3300, Nordex is thus completing the next systematic step towards its own goal of additionally reducing the cost of energy achieved by its turbines. As well as this, larger hub heights permit additional yield gains: The N131/3300 is available on a hybrid tower with a hub height of 134 metres or 164 metres. It has a guaranteed noise emission level of a low 104.5 dB(A) – even in yield-optimised operations without the use of any acoustic assistance.

Kreuzberger & Spengler is an independent family-owned company established by Ulrich Kreuzberger and Bernd Spengler in Dunningen-Seedorf in the Black Forest, Germany. The mid-sized owner-run company has been executing wind farm projects and assembling and operating wind farms for over 17 years. K&S is following the trend in favour of larger hub heights and has found in Nordex a capable partner for this and future projects.

As one of the leading producers of hybrid towers with large hub heights, the Max Bögl Group possesses extensive expertise along the entire process chain – starting with the construction of the foundation and the concrete tower and steel tower including indoor installation as well as in project planning and management and repowering. The hybrid wind power towers made from prestressed concrete and steel are engineered internally and produced at facilities in Sengenthal and Osterrönfeld in Germany with a capacity of 500 units per year, offering substantially greater efficiency and energy yields in non-coastal locations. To date, Max Bögl has successfully installed over 1,100 hybrid towers for its customers.