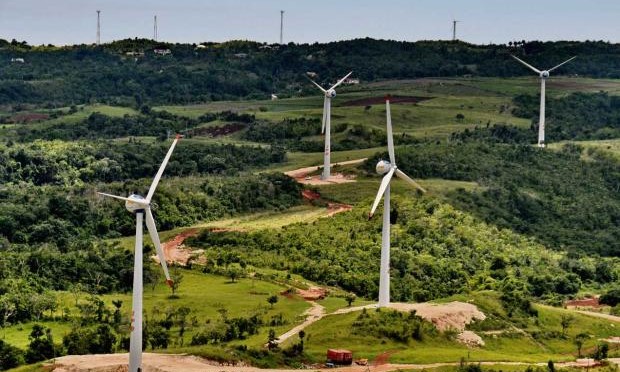 Wigton III, the 24 MW expansion of the Wigton Windfarm in Rose Hill, Manchester which was officially commissioned today by Prime Minister Andrew Holness, is the first of the three renewable energy projects selected by the Office of the Utilities Regulation (OUR) in 2013 to become fully operational and begin transmission to the national grid.

Wigton III began supplying energy to the grid in March at its projected output rate which will see it generating 63,072 megawatt hours annually.  The new facility, which consists of twelve 2 MW wind turbines, a 9.6 km transmission line and a new substation, was completed within the projected timeframe of 1 year and did not exceed its US$45 million project implementation budget. It was constructed by the Spanish firm, Gamesa, a global technology leader in wind energy.

The wind energy plant should reduce national oil consumption by 37,100 barrels per year which can save the country more than JA$230 million annually.  This will bolster Wigton’s positive impact on Jamaica’s economy as output from the company’s first two plants lessens oil importation by more than 120,000 barrel each ear.  This has resulted in more than JA$3 billion in savings for Jamaica over the 11 years Wigton has been operational.

The commissioning of Wigton III will also increase renewable energy input to the national grid by over 2%, which will contribute to the Government’s target of 20% renewables by 2030.

Prime Minister Andrew Holness said “This development augurs well for the evolution of how we as Jamaicans consume energy.  This is a big part of the reason that this facility here is so important to Jamaica’s development. Not only in terms of the energy it produces by harnessing the power of wind but as a symbol of where we as a country would like to go in the area of sustainable energy production.”

He further stated:  “In my recent budget presentation I noted that the diversification of the energy sources away from hydrocarbon sources is critical to reducing the country’s dependency on imported fuel.”

The Prime Minister also added “We, in managing the nation’s energy resource options, have prioritized renewables as the strategic resource that can make a difference to our energy security. As such and based on a more robust agenda, we will be upgrading the country’s net generation from renewables to the electric distribution grid to 30% by 2030.”

Minister of Science, Energy & Technology, Dr. Andrew Wheatley said, “The commissioning of Wigton III and its contribution of an additional 24MW of wind energy is significant, not only for its impact on the Government’s Renewables and Energy Diversification efforts, but also for what it demonstrates about our commitment to building the energy sector and developing sustainable and secure energy supplies for all areas of Jamaican life; from residential and commercial customers to production, manufacturing and heavy industries.”

Wigton’s General Manager, Earl Barrett said, “We are pleased that Wigton III has continued the company’s sterling track-record of completing projects on-time and within budget; and we are confident that the new plant will operate efficiently and continue Wigton’s role in contributing to meeting Jamaica’s energy needs in a manner that preserves our natural environment.”

A subsidiary of the Petroleum Corporation of Jamaica, (PCJ) Wigton Windfarm Limited is the largest wind energy facility in the English-speaking Caribbean.  The company began operating in 2004 when Wigton I, a 20.7MW generating plant was commissioned, which was followed by the 18MW Wigton II in 2010.  Wigton III brings the company’s total generating capacity to 62.7MW.